Sebha remains tense after a fortnight of clashes centred on the Sixth Brigade (Faris) barracks in downtown Sebha. Tribal mediation efforts have proven ineffective and as divisions have grown.

Clahes erupted earlier this month in Sebha between members of the Tebu community and Awlad Sulieman.

A Cyrenaican peace delegation pushed by the House of Representatives arrived in Sebha to mediate. They met with the factions and various tribal members in the south, yet no genuine commitments to peace emerged.

In contrast, another statement by the Sixth Brigade dated on the 20 February refuted the LNA’s claim and said they were under the Ministry of Defence of the Government of National Accord.

After the toppling of Qaddafi, Tebu and Awlad Sulieman revolutionaries partitioned the military barracks and town key-facilities. The Sixth Brigade and the Qala (Castle) hotel fell under the Awlad Sulieman’s control, while the airport and the 17th checkpoint were taken over by Tebu.

This led to a further deterioration in collaborative security in the town and allowed criminals to operate freely. The recent eruption of violence in Sebha gave the armed forces in the east and west of Libya an opportunity to claim authority.

Civilians continue to be the worst affected in Sebha. A family from Ghrefa was targeted by a sniper located in the Qala hotel, leading to the death of a young girl. Zakaria Al Hasnawey was also gunned down by a sniper on separate incident. Yesterday morning Masoud Usman Al Zaidi was reportedly injured by a sniper. 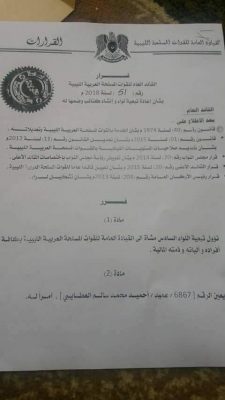 The LNA’s statement claiming an alliance with the 6th Infantry Brigade . 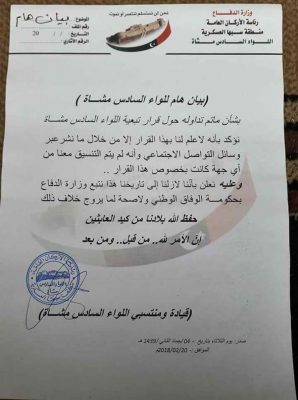 The Sixth Infantry Brigade counter-statement claiming they are aligned with the Faiez Serraj-led Presidency Council / Government of National Accord.