Libya ranked a lowly 171st out of the 180 countries ranked on the latest Transparency International Corruption Perception Index 2017. Regionally, it ranked behind every Arab country – except Yemen and Syria.

Transparency International said that this year’s Corruption Perceptions Index highlights the fact that the majority of countries are making little or no progress in ending corruption, while further analysis shows journalists and activists in corrupt countries risking their lives every day in an effort to speak out.

The index, which ranks 180 countries and territories by their perceived levels of public sector corruption according to experts and businesspeople, uses a scale of 0 to 100, where 0 is highly corrupt and 100 is very clean. This year, the index found that more than two-thirds of countries score below 50, with an average score of 43.

It went on to note that in a region stricken by violent conflicts and dictatorships, corruption remains endemic in the Arab states while assaults on freedom of expression, press freedoms and civil society continue to escalate. In this environment, it is no surprise that 19 of 21 Arab states score below 50 in the Corruption Perceptions Index for 2017, which captures levels of corruption in the public sector. 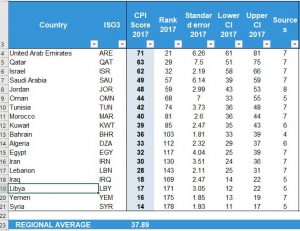 The worst performing Arab states in the index – Iraq, Libya, Somalia, Sudan, Syria, and Yemen – all suffer from weak public institutions, internal conflict and deep instability. Such situations allow corruption to become rife with little to no checks on official abuse. Amid ongoing violence, as well as internal wars and conflicts, all forms of good governance have eroded.

Further analysis of the results indicates that countries with the least protection for press and non-governmental organisations (NGOs) also tend to have the worst rates of corruption. Every week at least one journalist is killed in a country that is highly corrupt, the report said. 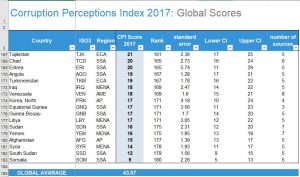 The analysis, which incorporates data from the Committee to Protect Journalists, shows that in the last six years, more than 9 out of 10 journalists were killed in countries that score 45 or less on the index.

‘‘No activist or reporter should have to fear for their lives when speaking out against corruption. Given current crackdowns on both civil society and the media worldwide, we need to do more to protect those who speak up’’, Patricia Moreira, Managing Director Transparency International said.

Water conference to be held in Tripoli in April