As part of the wider health reform programme initiated by the Faiez Serraj-led Presidency Council /Government of National Accord, a new head of Tripoli Medical Centre (TMC) was appointed.  The handover took place on Sunday.

The new head, Dr Nabil Alageli, is a Consultant Orthopaedic Surgeon at TMC, Assistant Professor at Tripoli Medical University and Consultant to the National Centre of Health System Reform (NCHSR). He is a graduate of Birmingham University and the Royal College of Surgeons of Edinburgh. He had also held various posts in the UK NHS system, including at Milton Keynes University hospital. 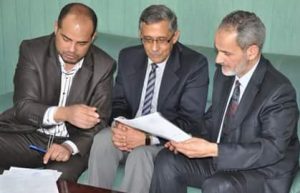 During a handover ceremony on Sunday, Dr Nabil Alageli (centre) takes over as head of the TMC (Photo: TMC).

The NCHSR is the body currently reforming the Libyan health sector. It was launched by Faiez Serraj in October 2017. It is the child of a long health review and reform process that started with the 2012 Tripoli health conference and its subsequent recommendations. It recommended that an autonomous health reform committee (NCHSR) be formed to carryout root review and reform of Libya’s ailing health sector.

Speaking to Libya Herald today, Dr Alageli admitted that his new role is ‘‘a very big challenge’’ in difficult conditions and with a scarcity of state resources. He explained that his appointment was part of a wider reform and reorganization programme of the TMC.

He explained that the Presidency Council ‘‘had decreed to reorganise the TMC to become an independent University hospital under the Prime Minister’s Office and run by a Management Council consisting of the Deans of 5 medical colleges, the Libyan Medical Board Director and a Director from the Ministry of Health’’.

‘‘This is part of a major plan to reform the Libyan health service put in place by the NCHSR and the EU-LHSS – and adopted by the Presidency Council President’’.

The function and success of the TMC is seen as a good barometer of the status of Libya’s health system. Its problems and challenges in many ways symbolise the rest of the country’s health sector as it is the single most used medical centre in the country.