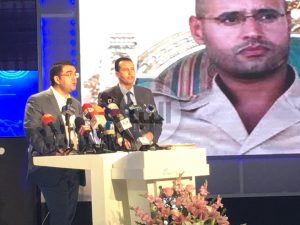 The PFLL, announce at a press conference in Tunis that Saif Al-Islam Qaddafi will stand in the 2018 elections (Photo: social media).

Supporters of Saif Al-Islam Qaddafi, son of deposed dictator Muamar Qaddafi, launched their campaign for Saif Al-Islam to run for the 2018 elections.

At a press conference held in Tunis today, the alleged Saif Al-Islam supporters in the guise of the Popular Front for the Liberation of Libya (PFLL), launched their election campaign. The PFLL was launched in Tunis last year.

Their election campaign is to be based on the principles of rebuilding Libya with the help of its neighbours for a unified Libya, with one president and through the existing political process.

It must be borne in mind however, that Saif has not been seen in public for years and his exact whereabouts are the subject of much speculation. There is even speculation as to whether those who claim to represent him and speak on his behalf are genuine representatives. Indeed, many were surprised that Saif did not even make a pre-recorded video appearance at the event or through social media.

These is also debate as to how much support Saif actually enjoys in Libya.

The announcement is the second such announcement regarding the planned 2018 elections after Aref Nayed, former Libyan ambassador to the UAE and owner of the Aman-based Libya’s Channel announced his candidacy last week.

Saif Al-Islam Qaddafi, Abdullah Senussi and 7 others sentenced to death