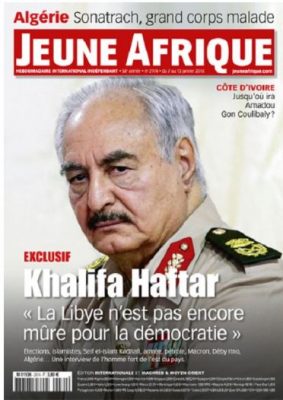 In a recent interview, Hafter told French media that Libya was not yet ready for democracy (Photo: Jean Afrique).

The official spokesperson for the Hafter-led Libyan National Army (LNA), Ahmed Mesmari, has continued to deny reports about the illness of Khalifa Hafter.

Reports on Tuesday evening, initially by Libyan media outlets, have snowballed over the last day and a half consolidated by some French media backing. The exact details are still unclear, but unconfirmed reports state that Hafter was initially taken ill to the Jordanian capital Amman and thereafter transferred to a Paris clinic as his condition deteriorated.

Yesterday, the official spokesperson for the LNA, Ahmed Mesmari, tweeted on the LNA’s twitter account ‘‘All the news about General commander’s health are false, Marshal Hiftar is in excellent health and he is following his daily general command duties and all op rooms specially Omar Moktar ops room’’. Later on, Mesmari avoided any direct comment on the topic at a press conference on Derna.

French media has failed to produce a photo of Hafter in Paris. On the other hand, despite all the rumours and conflicting reports, Hafter has failed to make a personal appearance.