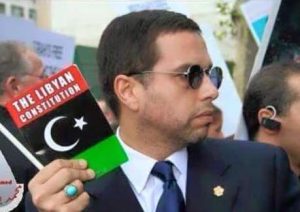 Prince Mohamed El-Senussi (Photo: National Conference for the Activation of the Independence Constitution and the Return of the Libyan Monarchy)

Prince Mohamed El-Senussi, the son of the late Crown Prince Hassan Al-Rida, has said that the only way out of Libya’s current crisis is a return to the pre-1969 monarchist constitution and that he is fully prepared to serve Libya’s people. The statement followed Saturday’s conference in Tripoli for the restoration of monarchy and the “independence constitution”.

It was the third and largest so far of such gatherings. The first was in Ghariyan in October 2017 and the second in Beida in November.  According to organisers, some 300 people were expected at the conference in Tripoli’s Corinthia hotel. In the event some 600 turned up from across the country.

In his statement, Prince Mohamed said that a return to the pre-Qaddafi constitution provided the quickest and most effective way to solve the crisis as well as maintain Libya’s independence and unity. A return to the old constitution would provide legitimacy in the country, enabling political institutions, including the government and parliament, as well the military and security forces,  the economy and the social framework to function properly, and develop.  There was no other workable solution.

The Tripoli conference, he further believed, was an important step on the road to restoring the pre-1969 constitution.

Organised by the National Conference for the Activation of the Independence Constitution and the Return of the Libyan Monarchy, the aim is to bring back the 1951 constitution as amended in 1963.

A leading supporter claimed that with the continued political chaos in the country and no sign of international efforts to solve the crisis succeeding in the foreseeable future, including elections, support for a “Senussi Solution” was growing.

“Now is the time for a Plan B”, he said, referring to UNSMIL’s efforts as Plan A. These latter, he believed, were destined to fail.

Further conferences are planned in a number of Libyan towns, including Tobruk, where support for the Senussis is seen as solid, as well as in places such as Zuwara and Zawia.