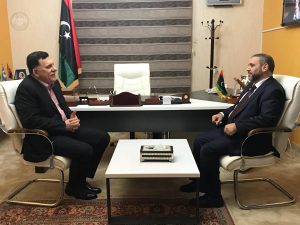 The head of the Presidency Council, Faiez Serraj, and the head of the High State Council (HSC), Khaled Mishri agreed on the need for consensus and the democratic process, during their meeting on Tuesday.

Libya’s political situation was discussed and it was agreed that there is a need to unify Libya’s sovereign state institutions. It was also agreed that elections should be held on a sound constitutional basis.

The meeting also addressed the various bottlenecks facing a number of public service facilities, ways of resolving the country’s economic and financial predicaments, and the Presidency Council’s Government of National Accord’s efforts to resolve them.

The meeting also examined the coordination frameworks and mechanisms available between the Presidential Council and the HSC, in accordance with the nature of their respective functions, the Presidency Council’s Media Department reports.

The meeting between Serraj and Mishri comes on the back of the democratic election on 8 April of Mishri as the new head of the HSC, succeeding the outgoing Abdulrahman Swehli.

Upon his election, Mishri, had called for a meeting with House of Representative (HoR) head Ageela Saleh in order to attempt to resolve Libya’s political impasse, which the country has been frozen in since the Tripoli militia coup in 2014.

Ageela Saleh, welcomed Mishri’s the invitation to meet for reconciliation talks in the coming days.

This, it will be recalled, is taking place with the backdrop of the reported illness and absence from the country of Libyan National Army Commander Khalifa Hafter.

Serraj has not spoken to Hafter, will not comment on stories without reliable sources. Hafter returning tomorrow