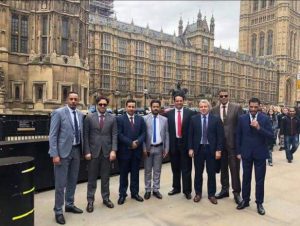 A delegation from Libya’s House of Representatives is on an official visit to the United Kingdom (Photo: HoR).

The First Deputy head of the House of Representatives (HoR), Fawzi Al-Nweri, is heading a high-level delegation on an official visit to the United Kingdom, which started Wednesday.

The delegation includes Salah Suhbi, Chair of the HoR Communications and Transport Committee, Saad al-Badri, member of the HoR Housing and Utilities Committee, Tareq al-Ashter, Rapporteur of the HoR Economics and Investment Committee and Faisal Gergab, Chairman of the Board of Directors of the Libyan state telecom holding company, LIPTC.

The delegation said that the visit comes in the context of the ‘‘consolidation of political and economic relations in a way that ensures the interests of the two countries, with attention to the remaining issues that serve and meet the aspirations and expectations of the two peoples’’.

The Libyan delegation also hoped to ‘‘lay the groundwork for long-term political and economic cooperation that would support institutional and service reform programs in various fields’’.  They also aimed for ‘‘the establishment of security and reconstruction in Libya, as well as the stimulation of public and private sector economic programmes through stimulating domestic and external investment to achieve sustainable development that would reflect positively on the direct life of the Libyan citizen”.

During these meetings, Al Nweri, expressed appreciation for the level of reception and welcome received by the delegation. He thanked the House of Commons and the British Government for the great hospitality extended to them and stressed that there were many indicators that demonstrated the depth and complementarity of relations between the two states.

Al-Nweri also reported that the delegation had discussed the convergence and harmonization of the interests and capacities of the two peoples in partnerships, in change, in reconstruction and development in Libya, to work in a more positive manner and in always keeping in mind long term activities, which maintains the positive perceptions of each other’s people.