Libya and US sign agreements on policing, prisons and justice 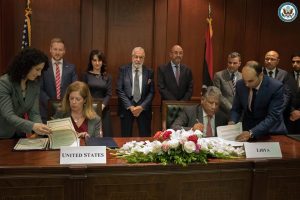 Libya and the US signed a number of agreements in Tunis last week. Libya’s Under Secretary for Political Affairs, Lutfi Almughrabi and the US Charge d’Affairs, Stephanie Williams, signed a Memorandum of Intent on Friday for airport security, and a Letter of Agreement to support Libyan policing, prisons and justice sector development,

Libya’s Foreign Minister Mohamed Siala was present at the signing ceremony and hosted by Ambassador Maaloul at the Libyan Embassy to Tunisia.

Siala and Williams reaffirmed their commitment to the UN Action Plan for Libya. Today’s signings demonstrate the continued commitment of the United States to political reconciliation, security and stabilization in Libya.

At the signing ceremony, Williams said, “Today, we are pleased to sign and announce a number of agreements with the Government of National Accord that define our mutual commitment to improving the security situation across Libya.”

The agreements provide technical assistance in the field of criminal justice through training while the second concerns the installation of a system for the disclosure of the authenticity of travel documents at airports and Libyan borders.

According to the Information Office of the Libyan Ministry of Foreign Affairs, the agreements may allow for the use of technical assistance, the training of Libyan national and the formation of qualified cadres in those areas.

Both sides indicated their aspiration to further strengthen bilateral cooperation to include economic, cultural and other areas.

The vision of the two sides agreed on the importance of continuing to support the efforts to address the current political, economic and security challenges in the context of preserving Libya’s unity, sovereignty and territorial integrity.

The two sides stressed the importance of supporting the efforts of the United Nations envoy in Libya, Ghassan Salama, to push forward the political process and stabilize the situation.