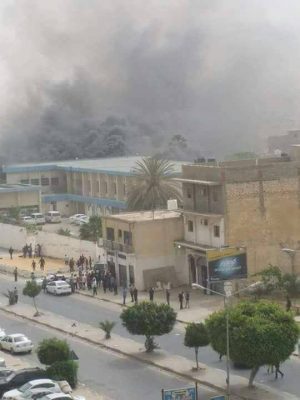 A ‘‘suicide attack’’ this morning on the Tripoli headquarters of Libya’s High National Election Commission (HNEC) in Ghoat Shaal killed at least 14 people with up to 7 injured, the Presidency Council (PC) Ministry of Interior has confirmed. The Faiez Serraj-led PC has been quick to condemn what it referred to as the ‘‘suicide attack’’.

ISIS has since claimed responsibility for the attack. It said the two perpetrators detonated their belts after they ran out of ammunition during clashes with guards.

Early unconfirmed reports say the attack was carried out by three ‘‘dark skinned’’ people. Two were reported to have died by detonating separate suicide bombs after they were cornered by security guards. The third is reported to have been captured alive by the Special Deterrence Force. Two large explosions were reported by numerous passers by and surviving HNEC employees. Earlier reports said the explosions were caused by car bombs.

Video footage on social media filmed from within the HNC HQ clearly shows an extended gunfight. Fire broke out in parts of the sprawling building which was later put out by firefighters.

The PC Minister of Interior designate Abdelsalam Ashour told Libyan media that the identity of the attackers was still unknown.

The head of HNEC, Emad Sayah told Libyan media that the HNEC database is safe as a backup is kept for ‘‘such eventualities’’ and that it can be activated within hours.

The Tripoli Security Directorate has banned all Libyan football league matches and any other sports events within the city of Tripoli for the next three days. Police sniffer dogs have been seen checking some main squares of the capital.

Both UNSMIL and the US embassy Tripoli (in Tunis) condemned the attack. UNSMIL said it ‘‘condemns, in the strongest terms possible, the terrorist attack on the High National Election Commission (HNEC) in Tripoli’’. It continued, ‘‘Such terrorist attacks will not deter Libyans from moving forward in the process of consolidating national unity and building the state of law and institutions’’. It called on ‘‘Libyan authorities to prosecute and bring perpetrators to justice as fast as possible’’.

The HoR, HSC and LNA were all swift in condemning the attack. Other embassies and Libyan entities have also condemned the suicide attack.