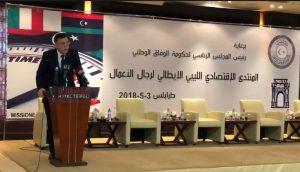 The Libyan Italian Economic Forum was held in Tripoli last Thursday. The event was opened by Presidency Council head Faiez Serraj and was attended by the Ministers of Economy and Communications, the Italian Deputy Ambassador, the head of GECOL and the Chairman of the National Oil Corporation, the Chamber of Commerce, Industry and a number of Italian business leaders and representatives of the Libyan-Italian Chamber of Commerce.

The Forum says that it aims to build a strategic partnership of mutual benefits and a programme of economic initiatives, as well as exploring opportunities for investment and joint trade and cooperation by the Business Council of the Libyan-Italian Chamber of Commerce. The forum aims to focus on the oil and gas, renewable energies and investment, infrastructure and services in education, and environment and agricultural sectors.

Opening the event, Serraj paid respect and condolence to the victims of the terrorist bombing of the High National Election Commission’s headquarters (HNEC) the previous day, adding that it was a warning that Libya’s security challenge was still present. 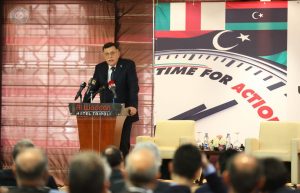 He said that the HNEC terrorist operation was similar in nature to what was being committed in many Arab and European capitals, which needs to be addressed and ended through unified, regional and international efforts and coordination. Serraj stressed that these terrorist operations will not discourage Libya from adhering to the democratic path that it has embarked on, and which these terrorists are enemies of.

Serraj looked forward to a joint Libyan-Italian relationship based on openness and cooperation through a strong strategic partnership, and to the mutual benefit of the two friendly people. He looked forward to the translation of this partnership into joint investments, programmes and initiatives in the economic, infrastructure and energy fields, the financial sector, the services sector and tourism – noting that there are many industries that can be produced in Libya with the help of the Italian partner.

“In our current planning, we are relying on the public-private partnerships, and until the rules of the market economy are completed, which we are slowly building with due study to preserve the social dimension of this transformation,” Serraj said.

Serraj expressed his confidence in Libya overcoming the current crisis, saying that he would not speak before the Economic Forum about the current political situation and the solutions presented – led by the need for elections. However, he said that he would touch upon one of the outcomes of the crisis, which concerns Italy and Libya: the issue of illegal immigration. 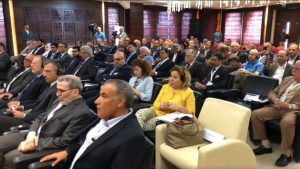 Serraj said that this problem could be an entry point for an investment that fills the security vacuum and reduces the problem, such as the reactivation of fishing and the establishment of tourism and economic projects along the Libyan coast. In addition to regional development in the southern regions and taking advantage of the decentralized management approach that his Presidency Council supports. With these steps, the Libyan-Italian Forum could take its first practical steps, he noted.

He added that these investments are part of the aims that both Libya and Italy seek in order to make the Mediterranean a lake of peace and cooperation and a market for trade and cultural communication.

With the movement of the economy, Libya could absorb hundreds of thousands of legitimate workers in accordance with existing laws and in accordance to the requirements of the building and development processes, Serraj explained.

Serraj concluded by emphasizing the importance that the Libyan State attaches to youth, “Understanding the foundation of sustainable development, we request that the forum focus in particular on the Knowledge Economy, qualification and training, and the development of the skills and knowledge needed for that’’. Adding that he hoped the forum would to come out with practical and workable recommendations.