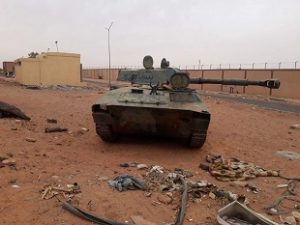 A tank inside the Sebha castle headquarters of the 6th Infantry Brigade, currently aligned to the Khalifa Hafter-led LNA (Photo: social media).

The fight was reported as being extremely tense, as the Awlad Sulieman deployed tanks in a failed attempt to regain their lost headquarter.

Reports say that there were at least 4 dead and 12 wounded from the 6th Infantry Brigade and 3 dead and 5 wounded on the Tebu side in Saturday’s clashes.

This latest escalation in fighting in Sebha is understood to be a reaction by the Tebu side to the LNA Sebha Military Commander, Brigadier Mabrouk Al Gazwie operating from Taminhent airbase, 30 Kilometres north-east Sebha.

In an official statement, Al Gazwie had ordered both Tebus and the 6th Infantry Brigade to ceasefire on Tuesday, stressing the withdrawal of all snipers off the roofs and the reopening of closed roads.

This has directly resulted in Saturday’s Tebu attack on the Sebha castle which they claim Awlad Sulieman is using it as sniper points, targeting the Tebu neighbourhoods of Tayouri and Nassiriya which the castle overlooks.

On the other hand, the 6th Infantry Brigade has claimed that it has withdrawn from its Sebha castle headquarters.

It will be recalled that the fighting erupted in early February in what at the time seemed to be no more than mere retribution and tit-for-tat killing and kidnapping between the dark skinned Tebus and the ethnically Arab Awlad Sulieman. The fighting was further exacerbated by inconsistent approaches and tackling from both the Faiez-led Presidency Council in Tripoli and the Hafter-led LNA in eastern Libya.

According to the latest Sebha Medical Center SMC reports, the fighting has resulted in a death toll of 23 and 91 wounded, mostly civilians, between 4th of February and 6th May. Meanwhile, according to Sebha Red Crescent, some 4,500 people were internally displaced and are living in dire conditions.