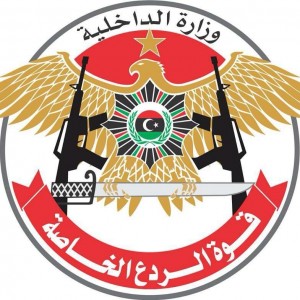 The Faiez Serraj-led Presidency Council has dissolved the Special Deterrence Force ”Rada” and rebranded it with increased powers (Logo: SDF).

Reporters Without Borders (RSF) has called for the immediate withdrawal of a decree by the Faiez Serraj-led and internationally recognized Presidency Council / Government of National Accord (PC/GNA) in Tripoli that would turn a militia, guilty of abuses against journalists, into an anti-crime unit with very broad surveillance powers.

In a statement released yesterday, RSF said that decree gives a blank cheque to the militia that prosecutes journalists. It added that Article 13 of Decree No. 555, issued on 7 May, dissolves “Al Radaa” (The Special Deterrence Force led by Salafist Abdelrauf Kara) – a militia responsible for kidnapping, detaining and torturing many journalists and ransacking Annabaa TV’s headquarters twice.

Despite this, RSF says the PC nevertheless through this decree ‘‘enrols its members into a new anti-crime and anti-terrorist unit and says the unit will have the same name as the militia’’. The SDF was recognized by the Tripoli authorities and was nominally under the PC’s Ministry of Interior.

RSF says that Article 4 of the decree gives the new unit broad powers in the use of technical surveillance resources that would enable it to intercept all “information liable to compromise the country’s safety, social peace or national security,” both information “on social networks and via traditional means of communication.”

“Giving broad surveillance powers to former militiamen who were guilty of abuses in the past against civilians and journalists is very disturbing, and all the more so in the current political context in Libya, in which state authority has been disintegrating,” RSF said.

“Decree No. 555 is a blank cheque to warlords, who will now be legally able to spy on communications between members of the public and journalists without any legal safeguards. We call on Prime Minister Fayez al-Sarraj’s government to withdraw this decree and to enact laws that safeguard the protection of privacy and personal information,” the RFS statement continued.

Surveillance and interception equipment has been sold to Libyan militias including Al Radaa since August 2014. In a June 2017 report on Libya, UN experts warned about the use of this equipment against civilians and said that, according to the information they had gathered, it had already been used in abductions.

Based in northeastern Tripoli, Al Radaa consists of around 1,500 fighters led by the Salafist warlord Abderraouf Kara. One of the capital’s most powerful militias, it openly supports the Sarraj government.

According to several witnesses, former journalists Suleiman Qashout and Ahmed Yaacoubi were kidnapped by Al Radaa members on April 29. Their families have had no news of them since then. Qashout and Yaacoubi are nowadays organizers of the Septimus Award, which has been given to Libyan media outlets, journalists and performers annually.

The RFS statement concluded by reminding readers that Libya is ranked 162nd out of 180 countries in RSF’s 2018 World Press Freedom Index.