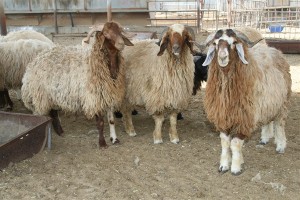 Rams for the Eid sacrifice will, for the first time, be booked online, the Libyan Ministry of Economy says (Photo: Eid rams by Libya Herald from archives).

The Faiez Serraj-led Presidency Council’s Ministry of Economy has announced that it is introducing an online booking system and an app for Libyans to book their Eid rams. Moslems are obliged to sacrifice an animal (if they can afford it) during the Eid al-Adha (feast of sacrifice) which is due in about 70 days from the end of Ramadan.

The revelation came today after a meeting was held in Tripoli by the Ministry of Economy which included the Animal Health Centre, e-payments companies and a number of companies importing animal stock.

The Ministry of Economy reported that the meeting was part of its early preparations for the import of sacrificial rams for the Eid Al-Adha feast. The main new feature this year – and a first ever for Libya – will be the introduction of an online system for booking and purchasing the sacrificial rams through local  cooperatives.

The Ministry explained that heads of families will only be able to book their rams by using their unique National ID number in order to ensure that every family can only purchase one ram. The price of the rams will be indirectly subsidised in that the importing companies will be able to open letters of credit through the Central Bank of Libya in the official exchange rate of LD 1.4 / dollar – as opposed to the current black market rate of LD 6.5/dollar.

The Ministry of Economy has set strict conditions for importing companies of livestock, including a 50 percent deposit of the expected value of imports which would be lost if conditions are broken. Retailers must also comply to the Ministry’s set prices and accept e-payments in order to mitigate Libya’s acute cash crisis.

The Ministry also reported that the Farmers Union estimated that local production will only meet about 50 percent of needs (800,000) and therefore it expects to import about another 800,000 heads at a minimum weight of 45 kg each – at an estimated total cost of Euro 130 million.