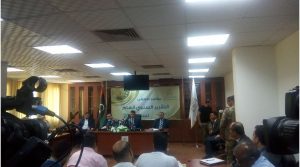 Launching the report, Audit Bureau head Khaled Shakshak said that communal or societal accountability is the accountability by society of all state authorities, including the accountability of the legislature. This accountability, he explained, could only be achieved through transparency. He confirmed that the information contained in the 2017 report is documented and that part of it has been discussed with the relevant stakeholders.

Shakshak did concede that there was an improvement in spending in 2017, despite there being some observations, especially in the arbitrary dispatch of people for study and work abroad, which he put down to mismanagement.

He stressed the need to address the exchange rate issue, to adopt economic and financial reforms and the need to prepare short-term economic plans. He called for the reliance on qualified personnel and placing competent people at the top of Libyan public institutions and public investment bodies and keeping away from the geographical quota and political and tribal distribution of posts.

He disclosed that the Libyan state had US$ 100 billion dollars in liabilities as a result of cases taken up by a number of foreign companies that had been operating in Libya. He said that the Audit Bureau had alerted the Libyan administration to a number of cases that it had won, valued at hundreds of millions of dollars.

Highlighting some of the findings of the 920-page report, the Audit Bureau said that government expenditure during 2017 was more than LD 32 billion. Tripoli-based government spending from 2012 to 2017 exceeded LD 256 billion and spending by the eastern-based Interim Government from 2014 to 2017 amounted to LD 21 billion. This brought the total spending by all governments to LD 277 billion over the five years.

On the other hand, state revenues in 2017 were LD 22 billion in contrast to 2016 where they were only LD 9 billion and LD 11 billion in 2015. The state budget deficit was made up by advances from the Central Bank of Libya, which has now reached LD 58 billion.

State-sector salaries in the 2017 budget were LD 20 billion for 1.5 million employees and government expenditure was LD 4.5 billion. The development/projects section of the budget was LD 900 million and subsidies were LD 6 billion. The report indicated that in 2017, LD 780 million had been disbursed under the emergency spending category.

The report also highlighted numerous corruption-related issues, including tax evasion and corporate manipulation of tax disclosures and accounts while in contrast, when companies want to transfer money abroad, they show profits so that the largest amount of foreign exchange can be transferred abroad, the report said.

The report also highlighted corruption in Libya’s investments abroad, dealings with boards of directors and their memberships, as well as in embassies and the use and seizure of state property abroad. The report also included administrative corruption in salaries, as it found that there was an overstatement of salary transfers without the use of the National ID Number System, which makes traceability difficult.

The Audit Report addressed administrative corruption in banks and their systems as well as the health sector and its problems as well as the education sector and their over employment. The report also referred to the poor performance of the Price Stabilization Fund (which distributes subsidized food to keep prices stable) and its failure to meet its targets despite the allocation of LD 300 million in capital and US$ 1.2 billion in the foreign exchange budget – yet it still failed to achieve its targets, the report said.