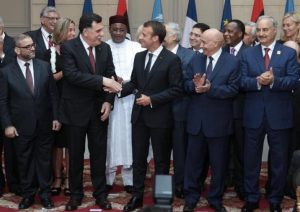 Yesterday, President Emmanuel Macron managed to break the Libyan iceberg in Paris. He convened all four parties to the Libyan conflict, along with the heavyweight presence of presidents and high delegations from a number of state. The meeting resulted in the parties agreeing to a joint statement. This statement symbolizes a new roadmap for Libya: a shortcut to elect legitimate institutions for a probably new transitional period that would lead to the adoption of a Libyan constitution and stability for the country.

The joint statement contains a preamble and eight paragraphs of commitments. Six of the eight commitments are related to the process of the upcoming general presidential and parliamentary elections that are to be held on the 10th of December 2018. The other commitments concern the unification of state institutions including military and security institutions and the Libyan Central Bank and bring to an end the duplication of government institutions.

The four parties at the Paris Libya conference represent the following:

– The latest elected Libyan parliament—the House of Representatives (HoR).
– The head of the eastern-based Libyan National Army (LNA) appointed by the HoR president in 2015.

After this refreshing step forward, however, President Macron in the press conference, stated that this joint statement has not been formally signed because certain parties “wished to share this statement with those who have elected them”.

President Macron also referred to the fact that some of the parties present on the table do not recognize each other. This position infers that both HoR and HSC may open the joint statement for discussion and may put it to a vote. This unnecessary formality—such as this signature—on the joint document undermines the Paris joint statement. It may actually allow the parties to disregard their commitments and may end up giving the parties excuses to derail from their commitments.

The legal status of the parties to the Paris declarations:

The three political parties to the Paris declaration (the HoR, the PC/GNA and the HSC) lack legitimacy. The HoR mandate expired back on October 2015. Its presence today is merely for being the latest elected parliament of Libya essential to issue the necessary legislation for the next elections and to peacefully transfer power.

The GNA never received the required recognition in accordance with the Libyan Constitutional Declaration. In any case, its mandate in accordance to the LPA had expired last year.

The HSC was established in 2016 in violation of the LPA and is not recognized by the HoR. Although the head of the LNA was appointed by the HoR during its mandate, it is not recognised by certain armed factions in the west of Libya, including the military council of the city of Misrata.

The Paris joint statement mentioned and supported an ongoing military process that is taking place in Cairo for reorganizing and unifying the Libyan military institution. It is an unfinished job that is still to be accomplished.

Today, Libya is run by illegitimate, shaky and unproductive de facto political institutions. Although these parties were present in an equal capacity at the Paris table, their presence is not one that is fully legitimate. None of them are representative of the Libyan people. The Paris joint statement’s objective is mainly to put an end to the question of illegitimacy, create new political institutions that truly represent the Libyan people and cautiously move on with the shaky democratization process. Giving the current political institutions the opportunity to put the Paris joint statement up for discussion is a wrong move that may devalue this document’s commitments.

Besides the question of legitimacy, these political institutions led to the impoverishment of the Libyan people. They are also tainted with corruption and dysfunctionality. The Paris joint statement may thus become their death certificate. The commitments on the joint statement are to be honoured and implemented in good faith.

The content of the Paris joint statement is not controversial, since all parties have already expressed their willingness to hold elections. Libyans are now expecting these de facto institutions to promptly take further serious steps to honour their commitments.

The UN and the international community share responsibility in the Libyan calamity. Two LPA creations—the GNA and the HSC—failed to provide any solution, instead contributing to Libya’s crisis. They were present as rivals on the Paris table. Today, the UN and the international community are committed to help in the timely implementation of the Paris joint statement. They should thus prove and honour their commitments, as opposed to adding a new document to their bloated Libya file.

Azza K. Maghur is a lawyer, human rights activist, and former member of the February Committee which amended the 2011 Transitional Constitutional Declaration allowing for the 2014 House of Representatives elections.

The views expressed in Op-Ed articles are not necessarily those of the Libya Herald.