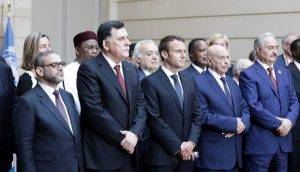 The contending Libyan parties committed themselves at yesterday’s Paris conference to elections by 10 December 2018(Photo: Elysee.Fr).

A joint communique was issued by Faiez Serraj, Ageela Saleh, Khaled Mishri and Khalifa Hafter at the end of the Paris conference on Libya yesterday. The conference was attended by more than 20 countries and organizations.

The statement committed the signatories to constitutional based elections, an electoral law by 16 September 2018, parliamentary and presidential elections by 10 December 2018, an acceptance of the election results by all parties, an end to parallel state institutions and unified military and security institution.

The full text read as follows:

Recalling the commitment of the international community to support the peace, security, and stability of Libya;

Recalling that the current political and security situation in Libya is not sustainable; Recalling the resounding call of all Libyans for credible, inclusive, and peaceful elections; In accordance with the December 17, 2015 Libyan Political Agreement (LPA);

In accordance with the inclusive political roadmap presented at the United Nations (UN) on September 20, 2017, and endorsed by the international community:

Against the backdrop of a Libyan-owned process and the full engagement of all Libyan parties involved, we committed in Paris on May 29, 2018, under the auspices of the UN and in the presence of representatives of the international community, to work constructively with the UN to realize credible and peaceful elections as soon as possible and to respect the results of these elections when they occur. We further agreed to the following principles, in support of the UN’s efforts to stabilize Libya:

Recognition of the importance of developing a constitutional basis for elections and support for the United Nations Special Representative of the Secretary General (SRSG) as he consults with Libyan authorities on a proposal and timeline for adopting the constitution. The adoption of the constitution will be a key moment for the sovereignty of the Libyan nation.

Agreement on the organization of parliamentary as well as presidential elections, as determined by the SRSG, in consultation with the Government of National Accord (GNA), House of Representatives (HoR), High State Council (HSC), and High National Electoral Commission (HNEC). The parties have committed to set the constitutional basis for elections and adopt the necessary electoral laws by September 16, 2018 and hold

Parliamentary and Presidential elections on December 10, 2018. Elections must be well-prepared with all the Libyan institutions, to advance the shared objective of stabilizing and unifying Libya.

Commit solemnly to accept the requirements for elections outlined in the SRSG’s briefing to the UN Security Council on May 21, including a new session of voter registration for an additional period determined by the High National Election Commission in liaison with the UN. Libyan leaders commit to accept the results of elections, and ensure appropriate funds and strong security arrangements are in place.

Those who violate or obstruct the electoral process will be held accountable.

Agreement to work constructively with the UN to ensure that the required technical, legislative, political, and security conditions are in place for national elections, including the adoption and implementation of the requisite electoral laws by the HoR according to the adopted timeline, and the consultation mechanism with the High State Council (HSC) agreed on in the LPA.

Libya’s official security forces, with appropriate support and coordination from the UN as well as regional organizations and international community, will be responsible for safeguarding the electoral process and ensuring the right of all Libyans to peacefully and democratically express their will about the country’s future. Any obstruction or interference with the voting process will not be tolerated, and those responsible will be held accountable.

Commitment to improve the atmosphere for national elections by all means possible, including by moving the seat of the HoR in line with the Constitutional Declaration, and working to eventually phasing out bring an end to duplication parallel of government institutions and government structures and institutions, and to encourage HoR and HSC to work immediately on the unifying of the Libyan Central Bank and other institutions.

Agreement to participate in an inclusive political conference to follow-up on the implementation of this statement, under the UN auspices and with respect for the timeframe and modalities determined by the SRSG, alongside with Libyan institutions.

As Libyan leaders make these commitments, the international community stands united in support of all Libyans as they work constructively with the UN toward credible, secure, and peaceful national elections and strive to realize a more prosperous future for the people of Libya through appropriate and substantial reforms to their economic model.