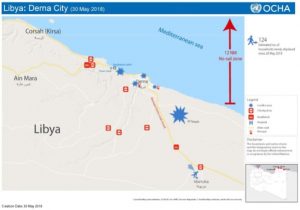 The UN report expresses concern on the crisis in Derna and calls for human rights and international law and convention to be respected in the fighting (UNsmil).

In its latest report released yesterday on the LNA-sieged city of Derna, the UN says that the tightened encirclement and closure of Derna, imposed by the Libyan National Army (LNA), has been ongoing since July 2017. Periodic escalations of armed conflict occur, as witnessed since mid-April when the LNA announced it would start a large-scale offensive against armed groups in Derna. Since then airstrikes, shelling, artillery fire and fighting between armed groups have been ongoing at various intensities.

The UN report says that humanitarian actors reiterate their call on all parties in the Derna conflict to:

Since the last update on 24 May, the escalation of fighting in Derna has reached unprecedented levels, due to the use of air raids and shelling, some of which are in residential areas, and heavy ground clashes.

The LNA has announced that it now has control over the city’s eastern and western entrances including Al-Fatayih Industrial Zone and the entrance of western Derna, including near the Nusseibeh Bint Kaab Mosque, and surrounding areas where clashes have been taking place. On 29 May, the LNA also announced they had taken control of the city’s highest area, which directly overlooks the Bab Tubruk district in Derna. The Derna Protection Forces (DPF, formally the Derna Mujahideen Shura Council) have subsequently announced their withdrawal from the Al Fatayih area. Local sources report that DPF are currently taking positions amongst civilian infrastructure in residential areas, mostly in the centre of the city and reportedly in civilian clothing.

Since 22 May, there has been a rising civilian casualty toll as a result of indiscriminate shelling of residential areas; reportedly at least five civilians have been killed including one boy and one girl and 11 have been injured including four boys. Damages to homes, livelihoods and other civilian infrastructure have been documented. Displacement is still at a small-scale, with most families settling with host families and relatives, for example according to local partners on 28 May 124 households (780 individuals) were newly displaced to Martuba and are staying with relatives.

There are also increasing concerns about movement restriction placed on civilians and on their protection. Derna residents are reportedly facing difficulties entering and exiting Derna (mostly families being prevented from leaving via Kirsa) and, at times, harassment and violence towards single men at checkpoints. On one occasion, reportedly a civilian was arrested at a checkpoint when he was part of a delegation from the hospital and the Derna Red Crescent who were attempting to receive dialysis medication from Al-Bayda. Stray bullets on 30 May reportedly killed a 12-year-old boy while he was leaving Fatma Zahra Mosque in ElSahel El Sharqi area, east of the city.

As of early May, the Martuba-Derna road has been closed; it was the most used route for access of essential goods. Currently the only open road that leads to the city is the coastal road via the Kirsa-Ras Hilal and it is only accessible by individuals who have permission to transport some essential commercial items.

The Derna Local Council has issued an urgent appeal to all humanitarian actors to intervene, outlining the dire situation facing the civilian population.

Derna city has been facing shortages of essential items since the beginning of the encirclement in 2017 including medicine and medical supplies, foodstuff, fuel and access to cash.

However, the humanitarian situation has been worsening since the recent escalation of armed conflict. Severe water, food and medicine shortages continue and unconfirmed reports that schools and public services (such as bakeries) have closed. The desalination plant in Derna city (close to the exit point to thewest of the city) has been shut down due to its proximity to areas of fighting and, therefore, concerns for the safety of its staff. In addition, there are unconfirmed reports that the plant was also affected by shelling on 29 May and thus has ceased functioning. The whole city is without water supply, affecting an estimated 125,000 people who now rely only on the minimal water they have stored in their tanks or from wells.

Also on 29 May, a complete shutdown in electricity occurred and continues to date, when the city’s only power plant was reportedly targeted by shelling rendering it non-operational.  Both plants were facing difficulty prior to these closures due to the lack of fuel and materials for maintenance. This adds to the already severe shortage of medical supplies and medication (particularly for chronic diseases) in the only operating hospital. The hospital is currently running on a generator, however, given the shortages of fuel, the situation is not sustainable.

The hospital is reportedly unable to cope with the increased number of casualties it is receiving. On 29 May, two women reportedly died at the hospital due to a lack of oxygen.

No humanitarian assistance has entered Derna since the escalation of conflict and a certain period before that; the last entries that can be confirmed are from March 2018. A breakthrough came through on 29 May when the Health sector confirmed the arrival of kidney dialysis materials and medicines provided by WHO to Derna Hospital. These supplies will cover 18,000 dialysis sessions. This delivery supports the chronic needs in Derna but does not respond to newly arisen needs. WHO is also working on getting approval to deliver much-needed 40 oxygen cylinders which await entry from Al Fatayih. All other planned humanitarian deliveries are currently awaiting approval to enter Derna, including medicine and medical supplies to deal with trauma and war injuries, fuel, food and items to resolve the water crisis.

Those humanitarian actors with access have put in place preparedness measures. Pre-positioned supplies include medicine and medical items, food and non-food items and further emergency education supplies. But their rapid and unimpeded entry will be fundamental, the report said.