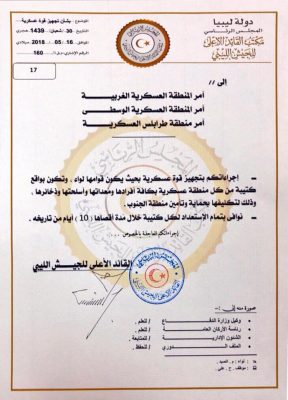 Faiez Serraj, head of the Presidency Council (PC), has decreed the formation of a special force ‘‘for the protection of the south’’. Serraj was acting in his capacity as Supreme Commander of the (Tripoli-based) Libyan Army.

The decree specifies that the force will be a brigade formed of battalions from all the military zones of Libya (in reality zones actually under the control of the PC). They are to be ready within 10 days of the issue of the decree (by 26 May) with their full members, equipment, arms and ammunition, the decree states.

It will be recalled that there has been fighting in Sebha between the dark-skinned Libyan Tebu minority and the ethnically Arab Awlad Sulieman tribe since February this year.

In March 2017 a three-way peace deal was signed in Rome in an effort to bring long lasting peace to the region. The tense situation in the south has further been confused by the multiplicity of players in the south with the House of Representatives sending a peace-making delegation, the Presidency Council forming a committee and now the PC creating a special force for the south.

The Hafter-led Libyan National Army claiming to have integrated the Sixth Brigade into its forces has also added to the tension. This was denied initially by the brigade soon after, who reaffirmed their backing of the PC’s Ministry of Defence, only to realign with Hafter’s LNA soon after that.

It will be recalled that the fighting erupted in early February in what at the time seemed to be no more than mere retribution and tit-for-tat killing and kidnapping between the Tebus and the Awlad Sulieman. The fighting was further exacerbated by inconsistent approaches and tackling from both the Faiez-led Presidency Council in Tripoli and the Hafter-led LNA and HoR in eastern Libya.