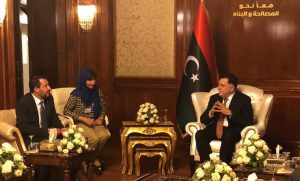 He met Presidency Council head Faiez Serraj in Tripoli where according to the Media Office of Libya’s Presidency Council, the Italian Minister conveyed the greetings of the Italian Prime Minister Conte, ‘‘reiterating his country’s support for the (Libyan) Government the National Accord and emphasizing the strategic nature of the relationship between Italy and Libya. Salvini was also reported to have said that Italy is ready to meet all that is required to stabilize Libya.

Presidency Council head Serraj, for his part, welcomed the Italian Minister and his entourage, stressing the distinctive ties between Libya and Italy, noting Italian efforts to help Libya overcome the current crisis.

The meeting also discussed how to develop cooperation in several areas, including combating illegal migration and human trafficking networks, where it was agreed to develop a comprehensive formula to address this phenomenon, taking into account the various security, economic and humanitarian dimensions, and to attach great importance to securing borders through programmes to train Libyan forces and to take care of Libyan regional development.

However, at a later 11-minute press conference held with Deputy head of the Presidency Council Ahmed Maetig, Maetig reiterated to the media that Libya would not allow any holding camps to be created in Libya. Salvini confirmed this and said he will call for the formation of holding camps outside Libya’s southern border and will call at a forthcoming EU meeting for the protection of Libya’s southern borders.

Salvini ended by saying that other commercial matters would also be discussed once security and illegal migration issues were dealt with, adding that unlike other states Italy did not see Libya as a problem but saw it as a big opportunity for development and exchange.