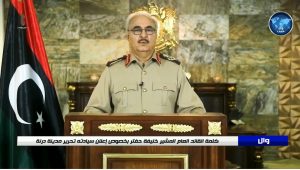 Khalifa Hafter announces the liberation of the eastern city of Derna from Jihadi forces (Photo: LANA).

The announcement came shortly after the LNA had announced in the same day that it had imposed its complete control on the city.

In his televised announcement, Hafter congratulated the LNA and the Libyan public in general on the victory over the terrorist forces which had controlled the eastern city since the 2014 revolution.

He assured that the LNA would continue its pursuit of the Ibrahim Jadran-led forces who had attacked the oil crescent recently adding that Libya’s wealth cannot be allowed to be used to support terrorists and corruption. He also condemned foreign support for terrorists in Libya.

It will be recalled that the LNA had increased its encirclement and closure of Derna since July 2017. And since mid-April it had announced that it would start a large-scale offensive against armed groups in the eastern. Since then airstrikes, shelling, artillery fire and fighting between armed groups have been ongoing at various intensities.

On 5 of June, the LNA had announced that it was in control of 75 percent of the city.

It will also be recalled that Derna has been under the control of the jihadi Derna Mujahidine Shura Council (DMSC) since 2014. In May this year the DMSC announced it was dissolving itself and joining the city’s broader-based Derna Protection Force (DPF).