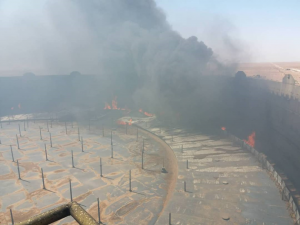 Libya’s National Oil Corporation (NOC) has announced that it has today evacuated all staff from both Sidra and Ras Lanuf oil installations in Libya’s north-eastern oil crescent.

The news comes after former Petroleum Facilities Guard (PFG) Central Region Commander Ibrahim Jadran launched a militia attack on the oil crescent this morning. There are unconfirmed reports that he has taken control of both Sidra and Ras Lanuf from the Khalifa Hafter-aligned Libyan National Army (LNA).

Jadran had been in control of the region and had imposed an embargo on oil production and exports prior to being ejected from the area by an attack by Hafter’s LNA in September 2016.

Unconfirmed reports say that at least one oil storage tank has been hit and is on fire. The NOC has not confirmed these reports.

Two days ago, there were unconfirmed reports in Libyan media that Jadran and his allied forces were gathering near the oil crescent poised for a possible attack. There were even reports that Hafter had transferred some troops from Derna to the region to counter the possible threat.

Jadran announced the launch of his operation in a seven-minute video circulating on social media. In it he claimed to be freeing the region from the ‘‘terrorist and extremist’’ Karama (Dignity) forces aligned to Hafter and to end the ‘‘injustice’’ in the oil crescent.

Jadran claimed he was backed by his local Magharba tribe and the Tebu tribe. However, there are reports that he has been backed by the Benghazi Defence Brigades (BDB), the arch-enemies of Hafter and his Karama movement who had been forcibly evicted from Benghazi. Unconfirmed reports also say that he has some rebel Chadian forces participating in his attack – rather than any Tebu forces.

It is thought that Jadran and his allies attacked the oil crescent area believing that Hafter’s forces are spread thin and occupied in the war in Derna or in order to relieve pressure on the ant-Hafter Derna Mujahidine forces.

In its official statement, the NOC said that the loss in oil production as a result of the shut-down is expected to be around 240,000 bpd and a planned tanker entry today to Sidra port had been postponed.

It said that he NOC board was currently meeting and following the situation closely. It called for individuals or political groups who attempt to capture Libya’s oil installations, blockade production, or attempt to make NOC a bargaining chip – to be brought to justice.

In a statement this afternoon, Faiez Serraj, in his guise as head of the Presidency Council and Commander-in-Chief of the Tripoli-based Libyan Army, condemned that attack and denied having given it any support.

At the time of writing there had been no official statement from Hafter or his LNA nor the House of Representatives in Tobruk.

US Africom conducts airstrike in Libya killing one