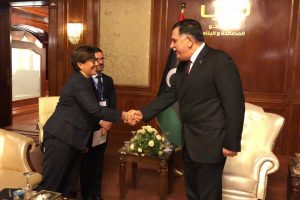 Italy’s Defence Minister, Elisabetta Trenta affirmed her support for Libya in the fields of reconciliation, health and illegal migration during her meeting with Faiez Serraj head of the Presidency Council and Government of National Accord during her visit to Tripoli Monday.

According to the Media Department of the Presidency Council Italy expressed its support for national reconciliation efforts in Libya and the completion of the consensual political process among all Libyan parties.

Italy also agreed to support Libya’s health sector and cooperation in the medical field as well as the treatment of injured and wounded from all Libyan cities and regions.

The dossier on cooperation in combating illegal migration and support for shelters had also been discussed, along with the support of the Libyan Coast Guard and Navy in training, the rehabilitation of Libyan elements and the provision of necessary equipment.

It was emphasized that the problem of illegal migration should be tackled at its root cause in the countries of the source of the influx of illegal migrants. It was also agreed that Libya was to be considered as a transit area by illegal migrants  towards Europe and Libya should be helped in controlling its southern border.

Mohamed El Sallak, the official spokesperson for Faiez Serraj said that Serraj “reiterated his categorical rejection of the issue of settling immigrants (holding camps) in Libya”.