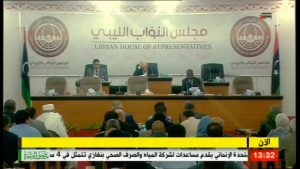 The HoR continued its debate of the referendum bill for Libya’s permanent constitution today. The session was adjourned for a final vote tomorrow (Photo: Screen grab of a live session from social media).

The House of Representatives (HoR) continued its debate of the referendum law for Libya’s draft permanent constitution in its official session in Tobruk today.

The official spokesperson for the HoR, Abdalla Belheeg, reported that 95 people had attended the session, which started late and only lasted for 52 minutes.

At the session, HoR head, Ageela Saleh, read out the amended bill that after the HoR’s Legal Committee had made its amendments.

There were frequent interruptions, official and unofficial, to the reading. The bill had a number of controversial if not illegal parts to it.

The bill stated that a two-thirds majority with at least 50 percent plus one votes is needed in every one of the three regions (Tripoli, Cyrenaica, Fezzan) of those who voted in order for the constitution to go through.

Members objected that this should be two-thirds of those registered to vote and that the creation of three separate regions and the 50 percent plus one option are all ‘‘unconstitutional’’.

Members have to vote yes or no for the whole bill.

The bill also proposed that if the Libyan public rejects the draft constitution, the democratically elected Constitutional Drafting Authority (CDA) would be dissolved and the HoR would select a new 30-strong drafting committee to propose a new draft.

Today’s session was adjourned until tomorrow with at least 30 members still registered to speak. In theory the HoR will take a final vote tomorrow.

One member complained that demonstrators outside the HoR building prevented a number of his colleagues from entering the HoR.

Tobruk airport has also been closed for three days due to, ostensibly, an industrial strike, which has not helped with logistics. To add another complication, the head of the CDA, Nooh Abdalla, announced his resignation yesterday – without giving any reasons.

HoR term ends in August, it has done nothing for Libya: Ageela Saleh