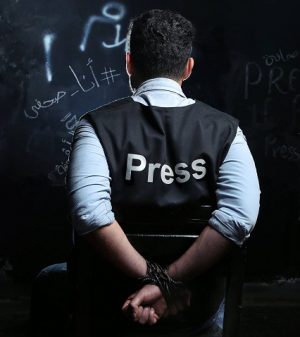 Four Reuters and AFP journalists, photographers were freed after they were arrested by PC-aligned militias in Tripoli yesterday (Photo from archives by LCFP).

The Libyan Center for the Freedom of the Press (LCFP) welcomed the release yesterday of the four Libya-based Reuters and AFP journalists and photographers.

The four were held for over ten hours by a Presidency Council / Government of National Accord-aligned (PC/GNA) militia whilst covering a story on illegal migration at the Bu Sitta Naval Tripoli base. They had permission to be there. 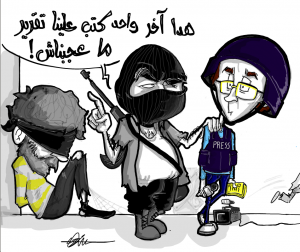 ”This is the last journalist to write about us (the militias) an article we don’t like” (Cartoon: LCFP).

In its statement, the LCFP reminded the PC/GNA Minister of Interior Abdelsalam Ashour to take early warning procedures and the protection of workers (media members) in the field.

They also reminded him of the importance of strengthening joint debate between members of the security apparatus and the media in line with the national interest whilst guaranteeing the respect for a free media.

The freed media members preferred to make no further comment to this newspaper as they wish to continue in their media jobs in Libya.