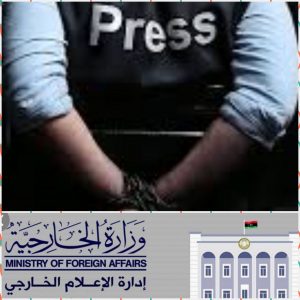 The international press freedom NGO, Reporters Without Borders (RSF) and the Libyan Centre for Freedom of Press (LCFP) have urged Faiez Sarraj, the head of Libya’s internationally-recognized Presidency Council and Government of National Accord to ‘‘intervene immediately to rescind all measures obstructing the work of international journalists and the Libyan correspondents of foreign media outlets’’.

In an open letter released yesterday and addressed to Serraj, the two NGOs said that ‘‘in a communiqué dated 3 August 2018, the Libyan foreign ministry’s Foreign Media Department (FMD) unveiled an unprecedented series of new measures that create further obstacles to the work of international journalists and the Libyan correspondents of foreign media outlets.

The existing interminable delays in obtaining and renewing visas, countless other forms of red tape and various kinds of harassment have now been compounded by 13 new measures to which international journalists and the Libyan correspondents of foreign media outlets must submit when applying to the Ministry of Labour and Rehabilitation for accreditation to work in Libya.

Each of these 13 measures details of an additional bureaucratic step that must be undertaken with an administrative entity, and constitutes another real barrier to journalistic freedom’’.

The letter continued that ‘‘on the pretext of offering them better security guarantees, the FMD is tightening its grip on the foreign media at a time when, in the run-up to the general elections scheduled for 10 December, the freedom to inform is proving more essential than ever for a democratic and pluralistic debate in Libya’’.

The letter also pointed out that ‘‘all existing accreditations have been cancelled since the end of 2017 on the grounds that new procedures are being put in place. Since then, the FMD has replaced the old procedures by mechanisms designed to prevent journalists from working freely and independently. It now issues only temporary permits and in a sporadic manner. Many journalists have been left without accreditation, which exposes them to them to the risk of being expelled or being attacked’’.

RSF and LCFP expressed ‘‘their utmost concern about the constantly escalating restrictions that are making journalistic work almost impossible. The FMD limits journalists to covering events in which it is a participant and obstructs the work of those who do not comply with its demands, using accreditation as blackmail to force international news agencies to stop employing some of their correspondents. All journalists agree that working in Tripoli now constitutes an almost insurmountable challenge that threatens both their physical and their judicial security.

We also think it is crucial to point out that the obligation for journalists to wear a vest with the word “Press” and the FMD logo constitutes a violation of media independence and endangers their lives in a country in which all media personnel are potential targets.

All of these unwarranted obligations restrict the freedom to inform and help to delay realization of the democratic aspirations that the Libyan people expressed in 2011’’.

To this end, RSF and LCFP called on the Tripoli-based Libyan government to:

It will be recalled that

It will be recalled that on 31 July four Libya-based Reuters and AFP journalists/photographers were held for over ten hours by a Presidency Council / Government of National Accord-aligned militia whilst covering a story on illegal migration at Tripoli’s Bu Sitta Naval base. The journalists/photographers had been invited by the Serraj-led Presidency Council / Government of National Accord to cover the event.

Although they were released at the end of the day, it was noted that neither the Serraj Presidency Council / Government of National Accord nor the Foreign Media Department (FMD) of the Foreign Ministry made any public condemnation of the incident.

The incident raised fears amongst Libya-based media on how they would be able to cover any forthcoming Libyan elections in such circumstances.

The FMD has also recently launched a quarterly prize for the best performing media/journalists operating in Libya. There are fears that this is a process by which the Tripoli-based government is attempting to restrict or control the media operating within Tripoli.