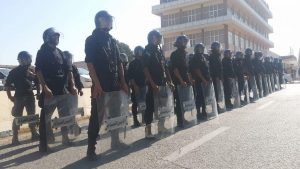 Heightened security has been announced by the authorities in Tripoli and Benghazi for next week’s Eid Al-Adha (feast of sacrifice) holiday period.

In Tripoli, the Ministry of the Interior aligned to the Faiez Serraj Presidency Council and Government of National Accord announced it was raising the state of security readiness in all its affiliated regional Security Directorates in preparation for the Eid period in order to counter any security incursions that may occur during the holiday period.

In its statement yesterday the PC/GNA Ministry of Interior said that it is has ‘‘instructed the security directorates of all the regions and security agencies to develop security plans to secure the entrances and exits of cities, the coastal road and their internal roads, as well as land, sea and air outlets, and to tighten the security on all vital targets, strategic locations, embassies and diplomatic missions’’.

The Ministry said that this included working to intensify static and mobile security positions, and to control all that would disturb public security, and intensifying traffic measures to control traffic violations and the movement of motor vehicles.

It said that these security measures aim to maintain security and stability ‘‘from terrorist and criminal threats which can target civilian life and public institutions’’.

The Ministry called upon Libyan citizens to cooperate with all security agencies, not to obstruct their work, and invited them to follow instructions issued by these bodies, thus help them carry out their work in the manner required.

Meanwhile in Libya’s second largest city Benghazi, Benghazi Security Room also announced yesterday that it was putting into operation a security plan to secure the city during Eid holidays.