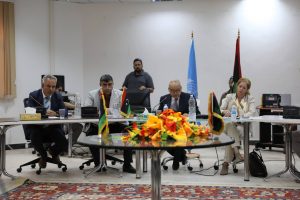 Ghassan Salame, Special Representative of the Secretary-General and UNSMIL head, facilitated a ceasefire agreement between Tripoli’s fighting militias at a meeting held in the city of Zawia today. Two militia coalitions have been fighting in the southern suburbs of Tripoli since 26 August.

The agreement – signed by representatives of the Government of National Accord, military commanders, security apparatuses and armed groups present in and around the Capital – comprises an immediate cessation of hostilities and a mechanism to monitor infractions.  Upon signing the agreement, the parties committed to:

UNSMIL said that it will also reach out to other parties who had expressed interest in joining the ceasefire but were unable to attend. It also committed to continue facilitations to strengthen the ceasefire and discuss the appropriate security arrangements in the capital. It gave no details of these much promised and illusive ‘‘security arrangements’’ that are part of the Skhirat Libyan Political Agreement (LPA) of 2015

UNSMIL said that Salame will continue to offer good offices and work with all parties to reach a lasting political agreement acceptable to all to avoid further loss of lives and for the benefit of the people of Libya.

Meanwhile, there were reports of ongoing fighting in the southern Tripoli suburbs of Khalat al-Furjan, Wadi Rabea, and Airport Road. Both sides were reporting advances and inflicting damage on the opponent.

What is not in dispute, is that the Tripoli-based forces have now stemmed the advance of the Tarhuna forces who were threatening to occupy Tripoli 48-72 hours ago.

Meanwhile, the Faiez Serraj-led Presidency Council and Government of National Accord (PC/GNA) formed a 13-member Emergency and Crisis Committee, headed by Serraj himself, which will ‘‘follow-up operations and put in place needed (security) measures’’. It will sit in permanent session until stability is returned to Tripoli, the decree (1269/2018) stated.

Serraj also passed a decree (122) today, in his role as the Supreme Commander of the (Tripoli-based) Libya Army, creating a 9-member Joint Operations Room tasked with ‘‘proposals to deter ay attacks on Tripoli’’.

The Tripoli-based Ministry of Interior, aligned to Faiez Serraj, today assured citizens that ‘‘security conditions in the capital were constantly improving after the activation of security checkpoints and security positions’’.

It also added that it is ‘‘in the process of mandating a number of its security agencies to fill this (security) void, and until these arrangements are carried out’’, it ‘‘alerts citizens to move away from the areas of clashes and to reduce their movement within these areas where there are no security agents inside’’.

The International Organization for Migration (IOM), meanwhile, reported that ‘‘Due to clashes between armed groups in southern Tripoli since 27 August at least 1,834 households (approximately 9,221 individuals) have been displaced to Bani Walid, Tarhuna and other areas in Tripoli, including 663 families displaced in the last 24 hours. Displaced households originate mostly from conflict-affected neighborhoods in Southern Tripoli, including Ain Zara, Salah Eddin, Qasr Ben Gashir, Ben Aoun and Khallat Al Furjan’’.

Reports that the vacant US embassy compound was struck by a missile were refuted by the embassy today, as smoke was seen billowing from an adjacent property.

Heavy militia fighting in south Tripoli as ceasefire breaks down