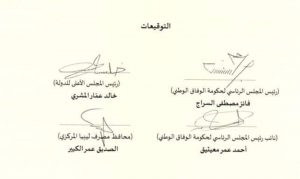 The signatures of Faiez Serraj, head of the Presidency Council and Government of National Accord, his Deputy Ahmed Maetig, the Tripoli Central Bank of Libya Governor, Saddek El-Kaber and the head of the High State Council, Khaled Mishri, on yesterday’s economic reform agreement (Photo: PC).

Libya’s economic reform package approved yesterday by its Presidency Council / Government of National Accord together with the High State Council and Tripoli-based Central Bank of Libya, came into effect yesterday.

The reforms contained in decree 1300/2018 apply a tax/levy on the sale of foreign currency commencing a week yesterday.

Banks deemed to be frustrating the process (in favour of corrupt practices or in favour of the black-market) will face measures.

Part of the revenues accrued from the new foreign currency levy will be set aside to reduce the government’s debt with the CBL. The balance will be spent on public services and utilities such as education, health and transport. The spending decisions will be made by the PC/GNA.

A technical committee will be set up to monitor the implementation of the decree and apply any corrective measures needed.

The ceiling for the annual private health and education allowance will be raised. It has to be transferred directly abroad to a health or educational entity. The new ceiling was not announced.

The decree prohibited the opening of Letters of Credit to state entities for the import of products already imported by the private sector. The exception will be for “essential and strategic” goods which is to be defined by the technical committee.

Finally, the decree says, vaguely, that the Serraj PC / GNA will be tasked with the necessary procedures to remedy fuel subsidies.

It must be noted that while there has been input by the House of Representatives (HoR) in the lengthy process of hammering out this deal, the HoR is not an official signatory to the deal.

It is not clear what the official position of the leadership of the HoR on the deal is.

There is a view that such fundamental economic reforms need to be passed as a law by the legislature, the HoR in Tobruk, as opposed to being passed as a decree by the Tripoli executive.

There is also a view that such fundamental reforms go beyond the “Financial Arrangements” (budget) powers of the PC/GNA as set out in the 2015 Skhirat Libyan Political Agreement (LPA).

Correction on 14 September 2018: The new foreign currency levy will apply to foreign workers’ salaries after the date of this law.