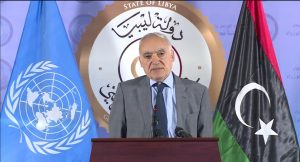 The new Committee would be entrusted with the implementation of the new Security Arrangements as of yesterday.

He confirmed that this committee had been agreed upon and that its urgent tasks were also agreed, which would allow for the establishment of an advanced dispute resolution mechanism.

He gave no details as to what these “new” Security Arrangements would be or how they would differ from the previous ones. He also gave no indication as to why existing militias would now agree to any new security arrangements having resisted them since 2015.

It will be recalled that the Skhirat Libyan Political Agreement of 2015, the agreement which created the Faiez Serraj-led Presidency Council and Government of National Accord (PC/GNA), stipulated that militias and their weapons were to vacate all built-up areas.

In reality, the Serraj PC/GNA and international community relied upon certain militias for implementing security, which enshrined rather than reduced the influence of militias.

With regards to the immediate security arrangements following the militia fighting in south Tripoli, Salame said that the decisions agreed upon at the second meeting in the city of Zawia, with the participation of all parties need to be secured.

He pointed out that UNSMIL discussed with the PC/GNA and a number of military leaders these decisions, and it was agreed to start implementing them.

Salameh expressed his satisfaction with the Zawia militia ceasefire during the past nine days, expressing his thanks to all those who carried out the commitments agreed upon at the Zawia meeting, and called on those who have not yet committed to implementing its provisions to do so.

The UNSMIL head said that there are other points related to security and that may appear to be non-security issues, related to liquidity and the currency exchange rate.

Forecasting the economic reform announcement of yesterday, Salame said that there will be some good news in the  next 24 hours – good news that Libyans have been waiting for for some time. He indicated that there had been much progress on many other matters since the Zawia militia ceasefire meeting.

Salama also stressed that security arrangements remained the focus, some of which had been implemented and others were under way, and that he hoped that no (militia?) parties would be negatively affected by the new Security Arrangements.

On the targeting of the Mitiga airport yesterday, Salame said that UNSMIL  is aware of those who targeted the airport twice and that their identity would be revealed the next time they broke the ceasefire agreement.

This last statement by Salame attracted much ridicule and criticism as Salame had promised to name any future perpetrators during the last Zawia meeting.