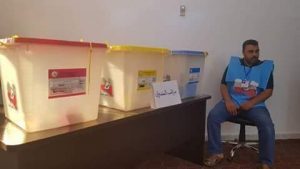 Local Council elections took place in Bani Walid and Darj on Saturday, timed to coincide with international day for democracy.

These local elections followed on from the successful elections that were held in Zawia in May.

Whilst the Bani Wali elections went off peacefully, an armed group was reported to have attacked one polling station in Darj from which it stole ballot boxes.

Whilst this may seem a little incident, it will disappoint the Serraj administration and the international community as these local elections are seen as dummy runs for the hoped-for national presidential / parliamentary elections.

The Libyan Central Committee for Municipal Council Elections (CCMCE), the organizers of local elections in Libya, said that they plan to organize local elections in 66 other councils as the legal term had run out for 70 local councils.