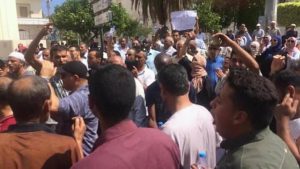 Demonstrators took to the streets of Tripoli yesterday demnding wholescale change in their lives and Libyan affairs.

The demonstrators, mostly young men and women estimated in the hundreds, asked for a raft of changes that would lead to the formation of a functioning Libyan state.

The demonstration started small, consisting of a few dozen diehards from the “The Voice of the People” movement congregating after the lunchtime prayer in Algeria square.

However, as the demonstration grew larger and more confident, they headed to Martyrs Square where the action grew even bigger.

The size of the demonstration was in no way comparable to those of the heydays of post 2011 enthusiasm, but it broke the glass ceiling of fear from Tripoli’s militias that had emerged recently.

The demonstrators proved that they did not represent any of Libya’s main political streams by chanting for the fall of Faiez Serraj and his Presidency Council and Government of National Accord, the Tobruk House of Representatives, the High State Council as well as the Tripoli Central Bank of Libya Governor Saddek El-Kaber.

Chanting, they rejected militias and demanded a state, law and order, army and police.

They said that they were fed up and wanted solutions to things such as electricity cuts and the cash-liquidity problem.

They shouted that it is a shame that a baguette of bread now costs one dinar – up from five dirhams. And as they passed the Old Souk, the location of the black-market currency market, they shouted abuse.

The demonstration reflects a change of mood in the capital as the inhabitants suffer from acute basic standard of living deficits.

As evidence of this mood change, Hay Al-Andalous Local Council and its HoR member called for all militias to leave their area.

It will be seen, however, if this disenchantment can be leveraged to achieve some real change.

It is also unclear if, despite numerous announcements and decrees, the Serraj government and his allies – UNSMIL and the international community on the whole – can take advantage of this window of opportunity to achieve some real traction on the ground.

Ultimately, if militias refuse to disarm and disband voluntarily, the Serraj administration has very little coercive power to force them to do so, and the international community refuses to use any further force in Libya.