Serraj talks tough on security – but can he back it up? 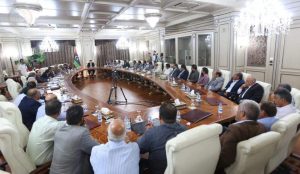 Head of the Presidency Council and Government of National Accord Faiez Serraj talked tough on Security and other measures during his meeting with local council leaders (Photo: PC/GNA)

Faiez Serraj, head of the Presidential Council and Government of National Accord, met with the heads of (reportedly) more than 50 western-based municipal and local councils in an open dialogue on the general situation and the repercussions of the bloody clashes in the southern suburbs of Tripoli over the last month.

After opening the meeting with a minute’s silence in mourning for the victims of the armed militia clashes and the recent terrorist attack on the Tripoli headquarters of the National Oil Corporation, Serraj delivered a speech in which he reviewed the measures taken in coordination with UNSMIL for the south Tripoli ceasefire and in initiating new Tripoli security measures (the Security Arrangements).

Serraj said that these new security measures would not be limited to Tripoli but would extend to other cities too.

Speaking in a rarely seen animated and tough tone, Serraj stressed that the issue is not just clashes between armed elements (militias), but even more so there are parties in the background who  direct the elements on the ground and work in all ways and by all means to bring down the (Skhirat Libyan Political Agreement) consensus and now work “to ignite a war in the capital which we will never allow”.

Serraj warned that whoever violates the ceasefire agreement “will face a critical response both domestically and internationally”. However, as per usual, he gave no specifics.

Serraj stressed that things will not continue as they had in the past and that what happened to the capital (the militia fighting) is a dividing line (in the sand) between what preceded and what follows.

Referring to the outcomes of the May Paris meeting, including: the holding of elections on a sound constitutional basis at the end of December this year; ending the transitional stages of its current institutions, provided that the House of Representatives (HoR) had submited the referendum law on the permanent constitution by September 16 – Serraj said that so far the HoR had not kept to the Paris agreement.

The HoR also failed, Serraj added, to implement the other outcomes of the Paris agreement such as the gradual dissolution of parallel bodies and the creation of the (right) atmosphere and non-escalation. Serraj added that “some” (holding effective political positions) insist on keeping the status quo in fear of losing their positions and privileges.

On the economic situation, Serraj said that he had hoped that the Central Bank of Libya would have been united in order to agree on a single monetary policy, and that he had tried to achieve such unity, but that the suffering of Libyan citizens no longer allowed for the luxury of waiting.

As a result, he said that he took the responsibility and issued a decision to launch the economic reforms after he had given up on the response of the HoR which was divided.

On the allegations of financial irregularities in the Central Bank of Libya and his government, Serraj said he had taken the initiative and officially asked the UN Security Council to form an international committee under the supervision of the United Nations to inspect the dealings of the Central Bank of Libya in Tripoli and Beida and other parallel bodies and to clarify the reality of the financial situation in the country as a whole.

Serraj stressed that he would not stand helpless before the bureaucracy and obstructers and that his administration will take the necessary decisions that will bring the country out of the current crisis for good, stressing that what is coming next will be decisive and will be better.