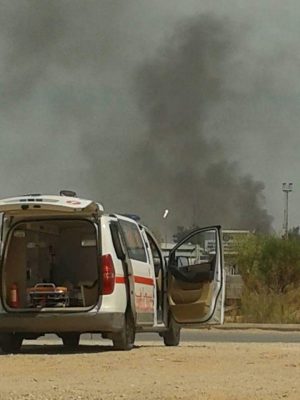 The Tripoli Field Hospital, part of the Faiez Serraj-led Presidency Council / Government of National Accord’ s Ministry of Health, has reported that there have been a total of 96 deaths and 306 dangerous and medium injuries as a result of the south Tripoli militia fighting.

The Tripoli Field Hospital, established specifically to provide timely medical services caused by the militia fighting, reported that yesterday alone there were 11 killed.

These including 8 civilians of whom there were three migrant workers and three militiamen. There were 33 wounded and one person still missing.

The Tripoli Field Hospital reported that since the start of the south Tripoli militia fighting on 26 August this year, there have been a total of 96 Deaths, 306 dangerous and medium injuries, 138 injuries, 17 missing, 123 displaced families and 264 who received help or aid.

The Tripoli Field Hospital also reported that one of its ambulances was hijacked at gunpoint on Thursday as it rushed in a humanitarian mission to evacuate a stranded family in the Cement Mixers area of the fighting zone.

“The Department of Wounded Affairs condemns the targeting of ambulances and medical staff. We stand at an equal distance from everyone and have nothing to do with political clashes.”

“The management of Wounded Affairs in all their cadres are not a party to any armed conflict, but their role is to provide humanitarian services to those injured without any discrimination and impartiality” , concluded its denouncary statement of the ambulance hijack.