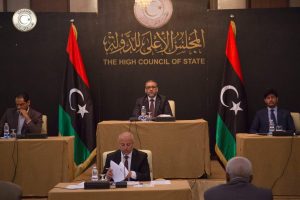 The HSC debated the HoR proposal to reshuffle and slimline the PC during its Thursday session(Photo: HSC).

The High State Council (HSC) debated the proposals put forward by the House of Representatives (HoR) during its 33rd plenary meeting at the Council’s Tripoli headquarters on Thursday.

The HoR proposal was on a mechanism to change the structure of the existing Presidential Council (PC), currently headed by Faiez Serraj. The HSC submitted its own amendments to the HoR proposal and decided to meet next Monday for a vote on the proposal.

It will be recalled that the UN-brokered 2015 Skhirat Libyan Political Agreement (LPA) stipulates that any changes to the PC must be done in consultation between the HSC and the HoR. To this end, the two bodies have created a joint committee, the Dialogue Committee, which has been discussing a proposal for the reform of the PC for weeks. In September, the HoR authorised its representative to communicate with the HSC.

During the Thursday session, HSC head, Khaled al-Mishri, thank the HoR for the recent effort of continuing dialogue and holding meetings to reach an understanding that would ‘‘push the political process towards a solution’’.

He said that the HSC will deal with the HoR proposal, and any initiative in it to solve the status quo and alleviate the suffering of the citizen in all positive, responsible and patriotic means, away from personal, partisan and geographical area interests.

However, with regards to the controversial ministerial reshuffle by Faiez Serraj, Mishri said that until the PC is actually amended, he would continue deal with it ‘‘responsibly in accordance with the (Libyan) political agreement’’.

Mishri admitted that Serraj and his PC had not consulted the HSC nor the HoR about his ministerial reshuffle. He said that he hoped Serraj had consulted and he hoped that the PC would avoid making any controversial choices in future.

Despite this, Mishri said that the HSC will deal positively with the new (ministerial) changes in order not to obstruct any efforts that may contribute to improving the security and living conditions of the simple citizen. He said he hoped he did not see regionalism and the quota system being used in appointing ministers and that such appointments are made on the basis of what he called ‘‘cleanliness of hand’’ and meritocracy.

The newly proposed PC reform plan received by the HSC, put forward to it by the HoR involves:

– Shrinking the PC down to just three members, consisting of one head and his two deputies.
– Decisions of the PC shall be taken unanimously.

– The selection mechanism for the new slimline PC will be based on the nominations of the HSC and HoR members drawn from each of Libya’s three historical regions of Tripolitania (west), Cyrenaica/Barqa (east) and Fezzan.

– These nominations are adopted by the HoR and HSC.

– The head of the PC shall be elected by the HoR from one of the nominated three candidates.

– The government will be separated from the PC and the PC will elect a separate prime minister.

– The HoR and HSC shall form a committee to agree on the appointment of Libya’s sovereign positions such as the Governor of the Central Bank of Libya and the Libyan Investment Authority etc.

HoR pushes ahead with reforming a new unified Presidency Council