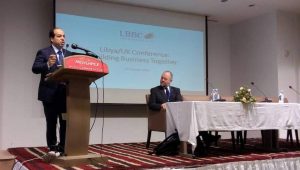 The LBBC held a two-day business event in Tunis this week (Photo: PC).

The Libyan British Business Council (LBBC) hosted a major business event in Tunis this week (22-23 October) under the banner ”Building Bridges Together”  with business representatives from Libya and the UK.

At the Tunis event, the LBBC signed a Statement of Intent with the NOC, signed by NOC Chairman Sanalla and LBBC Chairman, Sir Vincent Fean.

The LBBC said that one of the key priorities of the event was to reinforce the strong relations between the LBBC and the National Oil Corporation of Libya (NOC) following the successful meeting in Aberdeen on 8 May 2018.

That meeting recognised the mutual benefit to both Libya and the UK from enhanced co-operation in the development of Libya’s Oil and Gas Industry, the LBBC said.

The Chairman of the LBBC Sir Vincent Fean said: “The many meetings over the last couple of days highlighted strong links that have been established between the UK’s oil production, services and education and training companies with the NOC and its operating companies. I am delighted to see some practical and constructive results from these meetings, cementing lasting partnerships – a genuine win-win.”

The Chairman of the NOC, Mustafa Sanalla commented: “The meetings in Aberdeen, in May, and this week in Tunis, have shown that the UK is a key partner for Libya in boosting oil production. I welcome the LBBC’s efforts and look forward to further progress in building and strengthening this partnership.”

Meanwhile, deputy head of Libya’s Presidency Council Ahmed Maetig said that the coming period will see real investments in Libya not dependent on the state budget.

He stressed that interest in the oil sector was one of the priorities of his internationally-recognized Government of National Accord to ensure the increase of production capacity by allocating more than 40% of the development budget in 2017-18.

Maetig said that investment in Libya’s oil sector is required to increase production in order to achieve sufficient revenue to support other development programs.

In the same vein, he praised the establishment of these business forums aimed at building bridges of communication in the interests of the two countries in all fields.

He highlighted the historical relationship of the Libyan economy with the United Kingdom and the cooperation and partnerships with a number of Libyan institutions.

Maetig reviewed the stages of the Libyan economy during Libya’s political division and the constraints faced by the Presidential Council during the years 2016-2017.

He said the Presidency Council was forced to work without an approved budget and without the actual administration of financial institutions.

Despite this it was able to work on the economic reform program adopted recently and other actions undertaken by the Libyan government to complement the reforms so as to give the desired positive results.