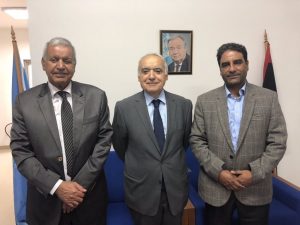 The HoR and HSC Dialogue Committee heads handed over a copy of the final agreement on restructuring the Serraj-led Presidency Council and Government of National Accord (Photo: UNSMIL).

Libya’s parliament, the House of Representatives (HoR), and the High State Council (HSC) have officially agreed on a mechanism for restructuring the Faiez Serraj-led Presidency Council.

A copy of the joint final agreement was handed over to the UN SRSG and UNSMIL head Ghassan Salame at a meeting today.

At the meeting, the next steps to be taken, the establishment of a timetable and the venue for holding of electoral assemblies, were also discussed with the heads of the HoR and HSC Dialogue Committees, Abdulsalam Nasia and Basheer al-Hosh respectively.

In their joint press release, the HoR and HSC said that they had, as per article 12 of the Libyan Political Agreement (LPA), agreed on restructuring the current PC to a three-member body consisting of a President and two Deputies, with a separate prime minister.

They stated that this newly restructured PC would act as a unity government for all Libya.

Also that the restructuring of the PC and unification of all state institutions is a patriotic project to end the existing political split in the country.

The press release said that the role of the new executive authority is to unify state institutions and prepare for presidential and parliamentary elections.

The press release called on all HoR and HSC members to override the nation’s interest and work in all seriousness in choosing a PC able to lead in this difficult period, away from narrow regional, political and personal calculations.

It also called on the current PC/GNA in Tripoli and the Interim Government in Beida to look at the High national interest and to join in a patriotic spirit in the patriotic restructuring project to ease all barriers before it.