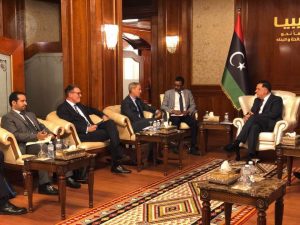 The head of Libya’s internationally recognised Presidency Council, Faiez Serraj, called on the Security Council’s Sanctions Committee to partially lift its arms embargo and the freezing of Libya’s funds abroad.

Serraj made the call during his meeting with the UN Sanctions Committee his office in Tripoli today.

Serraj welcomed the Committee’s visit to Libya stressing the importance of such meetings in exchanging views and in identifying the reality of the economic, political and security conditions that Libya is experiencing at this sensitive stage and what Libyan citizens are suffering as a result of these conditions.

Serraj stressed the importance of a comprehensive review of the UN sanctions imposed on Libya and of the viability of their continuation.

He stated that the UN sanctions have become an impediment to the progress of the economy and the start of the development process.

Serraj requested that the UN Sanctions Committee considered the possibility of allowing Libya to manage its frozen funds abroad rather than lifting the freeze on them.

He said that this would allow his internationally-recognized Government of National Accord to fulfil its obligations in providing services to its citizens and to make its economic reform programme a success.

With regards to the issue of security within Libya, Serraj highlighted the security arrangements that have been put in place in Tripoli, which are scheduled to be extended to other cities, and called for a partial lifting of the arms embargo in support of these efforts, in addition to combating terrorism and illegal immigration.

Serraj, without mentioning Khalifa Hafter by name, explained to the Sanctions Committee that there were those in Libya who were provided with arms and money illegally, while restrictions were being imposed on his legitimate government of Libya.

He pointed to the reports of the Sanctions Committee as a testament to all the sanctions violations in recent years.