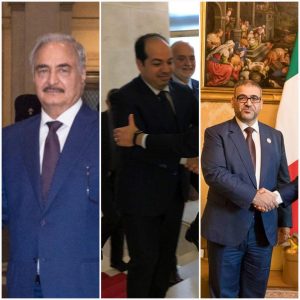 Libya’s main political leaders have all been to Rome over the last week in preparation for the Palermo conference on Libya (Photo: Collage by LH).

Libya’s main political figures visited the Italian capital Rome this week ahead of the international conference on Libya organized by Italy to be held in the Sicilian city of Palermo on 12-13 November.

The head of Libya’s House of Representatives (HoR), Ageela Saleh,  concluded his official visit to the Italian capital Rome at the invitation of the Italian Prime Minister Giuseppe Conte.

The official spokesperson of the HoR, Abdulla Belheeg, said that during his Rome visit Saleh met with Italian Foreign Minister Enzo Milanese and discussed with him the latest political developments and the situation in Libya and ways to reach a solution to end the current crisis in Libya ahead of the Palermo conference on Libya.

Saleh also met with Roberto Fico, Speaker of the Italian House of Representatives.

The Deputy head of Libya’s Presidential Council, Ahmed Maetig, was also in Rome on Wednesday where he met on with Italian Foreign Minister Enzo Milanese. Preparations for the Palermo conference were also discussed between the two.

The head of the Libya’s High State Council, Khaled al-Mishri, also met on Wednesday with Italian Foreign Minister Enzo Milanese in Rome, during which the they discussed preparations for the Palermo conference.

The visits follow on from the Rome visit by Khalifa Hafter on Sunday.