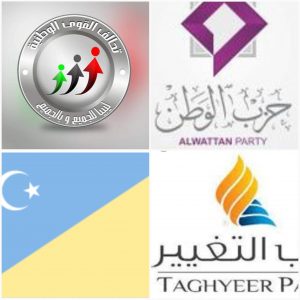 A group of 10 political parties, blocs and movements have condemned the fact that Italy has not included them to the two-day Palermo conference on Libya starting on Monday 12 November (Photo: Collage by LH).

A group of 10 Libyan political parties and movements have condemned the fact that they have not been invited to next week’s Palermo conference on Libya.

In a joint statement released today, they said that “The Libyan parties, blocs, groupings and political movements that have signed this statement deplore and follow with great astonishment the deliberate exclusion of them from attending international conferences on finding a solution to the Libyan crisis.

The most recent of these conferences is the Palermo Conference, during which the Libyan political issue will be discussed and the establishing of road map for ending Libya’s long-standing transition stage without success and to create the environment to conduct permanent presidential and parliamentary elections on a solid constitutional basis.

At a time when these undersigned political organizations affirm that this exclusion is not in the interest of the entire political process, as any political agreement in Libya must be made with the consent of all parties, whether political, military or social, to ensure its success and its smooth and easy implementation to save this nation from tampering and wasting public funds without any accountability.

Finally, we call once again on all Libyan actors to unite around the formulation of a national project that would save us all from the depths of the unknown, and takes out of us from this dark tunnel.