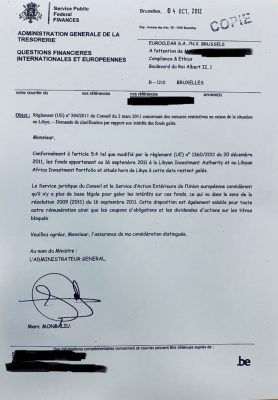 The letter released by the Belgian government providing in their view the EU legal grounds for releasing interest from Libyan UN-frozen funds (Photo: RTBF).

London, 8 November 2018:
There has been some progress on information on the matter of missing Libyan funds in Belgium frozen by the UN Security Council during Libya’s 2011 revolution.

The information came out as a result of questioning by Belgium’s parliament yesterday. The parliamentary questioning has revealed that the Belgian government has indeed been releasing the interest accrued on some Libyan funds since 2012.

However, as far as the Belgian government is concerned, its release of the interest on Libya’s frozen funds was based on legal grounds.

The letter is signed by Marc Monbaliu, the former Managing Director of the Belgian Treasury. It is dated 4 October 2012 and it mentions the unfreezing of the interests of Libyan funds – based on European law.

Paragraph 2 of the letter reads: “The Legal Service of the Council and the External Action Service consider that there is no longer a legal basis for freezing the interests of these funds, which is in line with the 2009 resolution of 16 September 2011.”

Belgian media estimate that payments of hundreds of millions of Euros were paid. Some say up to Euro 300 million could have been paid since 2012 totalling up to Euro 2.1 billion

It’s still not clear who made the request to unfreeze the paying out of interest accrued on Libya’s Belgian frozen assets.

More importantly, it is not clear where this money is going and to who exactly. More details are expected to be revealed in Belgium’s parliament over the coming weeks.

It will be noted, however, that the UN does not agree with Belgium’s interpretation of the EU law that allows Belgium to pay out interest from Libya’s UN-frozen funds.

On the other hand, the Libyan Investment Authority (LIA), Libya’s main sovereign wealth fund entity in charge of these funds, denied that any frozen funds in Belgium were missing.

As a result, many Libyans are demanding more transparency and information from their authorities about their country’s frozen funds.