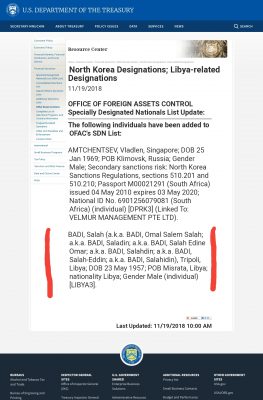 The move comes after the UK announced on Friday that Badi had been added to the UN Sanctions list.

In its Friday statement the Foreign and Commonwealth Office had said:

“The UK – along with our US & French partners – has secured United Nations Security Council agreement to sanction Salah Badi under the terms of UN Security Council Resolution 2213 (2015). We will continue to hold to account those seeking to undermine stability and security in Libya.

Salah Badi is the senior commander of the Al Somood Brigade, a militia opposed to the UN-recognised Government of National Accord. He has worked consistently to undermine a political solution in Libya. In August and September 2018, Salah Badi played a leading role in heavy clashes in Tripoli in which at least 120 people were killed, most of whom were civilians.

This designation will subject Salah Badi to a travel ban and asset freeze, thereby sending a clear message from the international community that acts of violence against the Libyan people will not be tolerated. The UK will not allow those seeking to obstruct peace and stability in Libya to act with impunity.”

The move on Badi by the international community came after reports last week that Badi had led a militia attack on the Gaser Benghashir area in the south of Tripoli and Tripoli’s old airport.

The move comes as part of a new policy by UNSMIL and the international community to single out Libyan “spoilers” of peace and stability.

It is also part of its efforts to maintain the Zawia ceasefire agreement that ended the South Tripoli militia fighting that broke out in August/September this year.

Following that ceasefire agreement the Serraj government is attempting to impose a new “Security Arrangement” in the capital. This entails regular non-militia security forces taking over security operations at more state institutions.