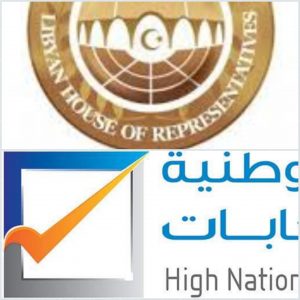 The HoR today officially handed over a copy of the permanent constitution Referendum Law to HNEC (Photo: Collage by LH of HoR & HNEC logos).

The Referendum Law for the holding of a public referendum on the country’s permanent constitution was officially handed over by First Deputy head of the HoR, Fawzi Al Nuweri, to the head of HNEC, Imad Sayeh, at HNEC’s Tripoli headquarters.

Nuweri handed over the constitution Referendum Law which was approved last Monday by the HoR after the HoR had passed the tenth constitutional amendment to “fortify the law” so that it “did not violate the (temporary) Constitutional Declaration (of 2011).

The HoR added that with this move, the HoR had ended its constitutional duty, as set out in the 2011 Transitional Constitutional Declaration (and as amended in 2014).

The amended Transitional Constitutional Declaration is Libya’s operating temporary constitution which gave birth to the HoR and set it specific short term tasks.

These were to pass a Referendum Law for the Permanent Constitution, pass that constitution if approved by the general public in the referendum, and prepare the country for elections based on that permanent constituion.

Those elections would lead to a fully empowered government that would finally take Libya out of its political transitional stage that started in 2011 with the ending of the Qaddafi regime.

It will be recalled that there still persists doubt by some HoR members, analysts and commentators as to the strength of the Referendum Law and the Constitutional Amendment that empowers it.

This criticism, which is not without foundation, falls within the overall narrative that the incumbent Libyan political powers wish to extend their stay in power by ensuring a continuation of the status quo and delaying any possible elections that would end their tenure.

Indeed, during his latest Libya brief to the UN Security Council on 8 November, SRSG and UNSMIL head, Ghassan Salame, accused both the HoR and High State Council (HSC) of delaying elections. He called the HoR sterile and accused it of wasting time and failing to ùphold its constitutional responsibilities.

Salame slams HoR and HSC as sterile and time-wasting

40 HoR members denounce Salame for his criticism at UNSC