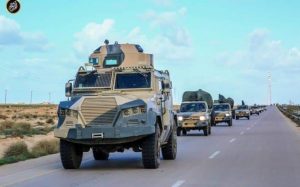 The LNA’s War Media Department released these images purporting to be its forces moving on to and deterring what it called the Jadran-BDB forces at Sadada. It claimed that these forces were planning to attack the eastern Oil Crescent (Photo: LNA).

The United Nations Special Mission in Libya (UNSMIL) warned against the possible escalation of manoeuvres into clashes as the Khalifa Hafter-controlled Libyan National Army (LNA) made a pre-emptive move on what the LNA described as Jadran-Benghazi Defence Brigades (BDB) forces.

The UNSMIL statement of Thursday came on the news that LNA forces had moved towards Sirte, and hence by definition nearer to Misrata, in pursuit of the Jadran-BDB forces.

These manoeuvres caused some alarm in some quarters in Misrata, and the threat of a possible clash between Misratan and LNA forces was heightened by regular and social media.

Meanwhile, the LNA held a press conference on Wednesday saying that their forces had taken over the Sadada Castle/Fortress near Bani Walid and south west of Misrata, where forces loyal to Jadran and remanents of the BDB have been stationed for many months.

The LNA said that the LNA inflicted heavy casualties on the Jadran-BDB forces and had chased them towards the entrance of Sadada.

The LNA claimed that Ibrahim Jadran, the former Petroleum Facilities Guard (PFG) ommander who is listed on the United States and Security Council sanctions lists, was preparing to launch another attack on the eastern Oil Crescent area starting from Sadada area. This attack was halted as a result of the LNA’s surprise attack, the LNA claimed.

The BDB are made up of anti-Hafter forces who used to live in Benghazi but were forced out of their city after Hafter had won the war between them. Hafter refers to them as Islamists/terrorists.

Some observers say that there is no real ideological difference between Hafter and the BDB who were allies at tge veginning of Libya’s 2011 revolution who had fallen out over power.

It will be recalled that Ibrahim Jadran had launched a successful surprise attack on parts of Libya’s eastern Oil Crescent on 14 June 2018. He held on to them until they were recaptured by the LNA on 22 June 2018. The LNA ckaimed then that the BDB took part in that attack.