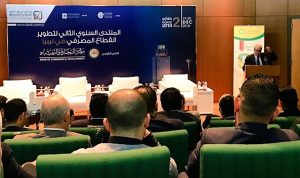 A number of new projects were announced at the Second Banking Forum in Benghazi (Photo: Social Media).

A LD 100 million SME finance fund, a new airline and a private sector banking union were announced on Thursday at the banking conference in Benghazi.

The announcements came at the Second Annual Libyan Banking Sector Development Forum held in the city of Benghazi from 19 to 20 December.  The event followed on from the first banking forum held in Tunis in November 2017.

The LD 100 million Libyan dinars “Waad Programme” for financing small and medium-sized enterprises (SMEs) was announced at the event by the Bank of Commerce and Development (BCD), the main sponsor of the Benghazi event.

The BCD was Libya’s first private bank to be established as part of the privatization drive by the former Qaddafi regime, and is the largest private bank. It is headquartered in Beida, in eastern Libya.

The BCD said that Waad is a national development program to help diversify and revitalize Libya’s economy and promote its private sector. It aims to support youth projects and encourages them to establish economic and industrial projects.

The forum also debated the need for the increased role of electronic payment methods in Libya instead of the dominant role of cash. This especially so in view of the acute liquidity crisis that Libya had been suffering over the last two years.

The economic reforms announced by the Serraj Tripoli administration in September have, however, greatly eased the cash crisis.

The BCD also announced the launch of “Wasel” a company to support Libya’s transport sector. This company, the bank said, will provide in its future plan a range of services, including the service, “Rahal,” on the lines of Uber taxis, which will operate initially in Tripoli and Benghazi with 100 cars in every city.

Rahal will also launch within weeks a passenger bus service within Libyan cities.

The BCD also announced at the event the formation of a new union of private banks formed by Libya’s 10 private banks.

The new private bank union is meant to better represent the interests of the private sector. A Libyan Association of Banks, located in Tripoli, already exists, however, it is dominated by state sector banks who are by far the largest banks in Libya.

Second Libyan banking forum to be held in Benghazi