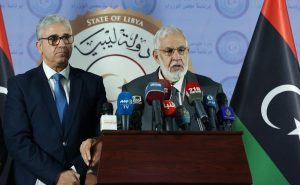 The internationally recognized government of Libya admitted its security short fallings today following the suicide terror attack on its Tripoli Foreign Ministry headquarters and called for the partial lifting of the UN Libya arms embargo.

Speaking during a press conference today after this morning’s suicide terror attack on the Libyan Foreign Ministry’s Tripoli headquarters, the Foreign Minister of the Faiez Serraj Presidency Council and Government of National Accord, Mohamed Siala, said that what happened to his Ministry “could have happened at any capital of the world.”

The press conference was held jointly at the Prime Minister’s Office with the Interior Minister of the Serraj Government, Fathi Bashagha.

Siala stressed that such attacks will not decrease the determination of Libyans to build their state of democracy and law.

Siala said that his Foreign Ministry will start its work tomorrow morning from a new temporary headquarters, allocated by the Presidential Council. He said sthat this attack will not dissuade the Ministry staff from serving Libya and the Libyan people.

Attack is on symbol of state sovereignty

With regards to the aim of the attack on the Foreign Ministry’s headquarters at this particular time, Siala explained that the Ministry of Foreign Affairs represents the sovereignty and symbolism of the Libyan state and that its targeting was expected.

Having admitted that the targeting was “expected”, Siala gave no explanation of why it was not mitigated.

The Foreign Minister further revealed that all its important documents within the building were not destroyed.

On the other hand, Foreign Minister Siala used today’s terror attack to further pressure the international community to partially lift its arms embargo on Libya.

“What happened today is a message to the international community to respond to Libya’s requests to the sanctions committee for granting exemptions to the supply of certain types of weapons to counter terrorism,” Siala said.

“We insist on pressing and continuing the demand to partially lift the arms embargo. The Security Arrangements cannot be implemented without lifting the arms embargo” Siala stressed, adding that the international community has to respond to these demands if it has the desire to resist terrorism.

For his part, Interior Minister, Fathi Bashagha, said that the morning attack on the Foreign Ministry headquarters was carried out by perpetrators that were reported by witnesses and by preliminary investigations to be three dark-skinned individuals.

He confirmed that the Criminal Investigation Department had started its investigations into the incident, stressing that the number of martyrs killed by this terrorist attack were two: a Foreign Ministry employee and one security man. The Health Ministry bulletin still says there were three dead.

Bashagha said that there were eighteen wounded, two of whom have been discharged, and the rest were not serious injuries.

Bashagha said that no one had claimed responsibility for the attack yet, and that his Interior Ministry is in the process of forming a number of committees to study and develop security plans to address the “security shortcomings”.

“Security Arrangements” not yet implemented?

Surprisingly, Bashagha revealed that the so-called “Security Arrangements”, that were relaunched by his government and UNSMIL after the south Tripoli militia fighting Zawia ceasefire, that “are shared by all the security services in addition to the military zones have not yet been implemented”.

This revelation will come as a surprise to many Libyans and Libya observers as the Serraj government had made much of their implementation especially with the symbolic handing over of some sites by militias.

Bashagha said that the reason for the lack of implementation of the Security Arrangements is that they are “undergoing arrangements that must be taken into account”. He did not clarify any further.

Bashagha was keen to share out the security short fallings. He stressed that “the security responsibility must be met collectively and that the security chaos may help the terrorist organizations to carry out the operations that are harming citizens.”

He said that they were taking advantage of Libya’s wast geographical area and its great resources and strategic location.

Bashagha said that his Ministry is in the process of developing a new public entity under the name of the General Directorate of Security Services, which will deal with combating terrorism, money laundering, law enforcement and security coordination between all the security services, so that there is “no vacuum between all these security agencies combined”.

He made no specific mention of militias and their role or lack of in the process.

Bashagha said that the investigations into today’s terror attack were still ongoing, and that the evidence would be completed and that the three attackers would be identified through DNA analyses.

Meanwhile, international condemnation of the terror attack was swift.

The UN Support Mission in Libya (UNSMIL) said it “strongly condemns the cowardly terrorist attack on the Ministry of Foreign Affairs, today, in Tripoli.

It expressed its deepest condolences to the families of the victims and wished a speedy recovery to the injured.

“UNSMIL reaffirms that attacks on state institutions constitutes an attack on all Libyans.”

It added thatb“Terrorism will not triumph over the Libyans’ decision to move forward towards building their state and renouncing violence. We will not accept any attack on a state institution, especially one committed by a terrorist group. We will work with the Libyan people to prevent terrorist groups from turning Libya into a haven or an arena for their crimes,” said Ghassan Salamé, the Special Representative of the Secretary-General in Libya.

Its statement said that following the attack, Salamé contacted the Government of National Accord to denounce the terrorist act, offer his condolences and call on them to enhance their protection of public institutions. The Mission is following up with the authorities in Tripoli the course of this tragic incident and stands ready to support.

The British Government, on the other hand, said it “Condemned appalling terrorist attack on the Ministry of Foreign Affairs earlier today in Tripoli. Our deepest condolences to the families of the victims. We wish all those who were injured a speedy recovery.”
‬⁩