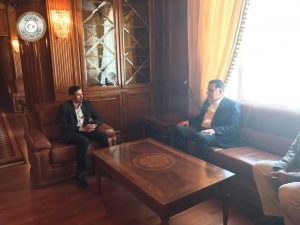 The Faiez Serraj Presidency Council and Government of National dissolved the Fuel and Gas Crisis Committee on Sunday.

The decree (No. 10/2019) transfers all the committee’s competencies to the National Oil Corporation (NOC).

Ironically, the decision comes after the controversial committee seemed to receive a new lease of life after relaunching its activities.

It has been very active in its anti-smuggling efforts over the last few months of 2018 – with an equally high media profile led by its controversial head Milad al Hajrasi.

The committee and Hajrasi seemed to have come to an end in August last year when the Brega Marketing Company, a wholly-owned subsidiary of Libya’s National Oil Corporation (NOC), confirmed its dissolution and the sacking of al-Hajrasi.

Brega is the NOC entity in charge of fuel and gas distribution within Libya. In theory, the anti-Fuel smuggling committee was supposed to be under its authority.

Brega also announced that Hajrasi had been ‘‘referred for investigation’’. It said that both the committee and its head were fictitious.

Brega said that the committee was an illegal entity that it never created and that its head was appointed on 5 May 2015 by the illegal National Salvation Government put in place by the militia coup of 2014.

In view of this, Brega said that the very popular Fuel and Gas Crisis Committee’s Facebook Page was ‘‘a media front used as a cover for smugglers in order to mislead public opinion and to disseminate fake news and to misappropriate the anti-smuggling efforts of others or to claim a relationship with them’’.

It stressed last August that the Committee’s former head ‘‘no longer represents Brega Marketing Company in any form’’.

The extraordinary revelation by Brega had led to an out pouring of public dismay in Libya. Whatever the legal status of the Fuel and Gas Crisis Committee and its head Milad Al Hajrasi was, it had succeeded in creating a huge popular and populist following through its alleged anti-smuggling efforts.

Brega’s August statement raised doubts about the anti-smuggling claims of actions and activities that the Fuel and Gas Crisis Committee and its head Milad Al Hajrasi have been making.

The incident led to many conspiracy theories being thrown about and claims that the Fuel and Gas Crisis Committee and its head Milad Al Hajrasi were being removed by vested interests, maybe within Brega and the NOC, because of their success in curbing smuggling.

What is also difficult for the Libyan public to accept is that Hajrasi has been photographed with numerous Libyan officials and out in the field of action on the Tunisian border on many occasions.

He has been photographed in an official meeting with NOC chairman Mustafa Sanalla and Presidency Council head Faiez Serraj.

Hajrasi has also held a number of press conferences with the media in Tripoli – without ever being challenged by the Tripoli authorities. The recurring question by many Libyans is: why now? Why had the NOC’s Brega Company waited so long to act?

To add to the conspiracy theories and yet another layer of confusion, the committee and Hajrasi seemed to make an official comeback on 4 December by dropping the previous NOC/Brega-based logo on their Facebook page and adopting the Presidency Council and Government of National Accord logo. 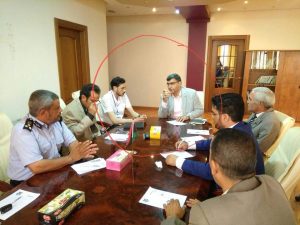 This was followed by posts of photographs on 4 December of Hajrasi in a meeting with leading PC/GNA security heads.

However, the NOC/Brega has has never accepted Hajrasi’ s legitimacy and his high profile media campaign. They were disturbed by his independence and ability to successfully transcend tribal, regional and political barriers in working with militias to counter smuggling.

It is unclear why and how they were able to persuade Serraj to sack Hajrasi and what alternative plans they have for the state’s anti-smuggling efforts.

However, there is wide agreement across all Libyan divides – baring the criminal few – on the damage that the smuggling of fuel and other subsidised goods is causing the state.

It will therefore be seen what the Serraj administration and the NOC do in replacing Hajrasi and his committee.