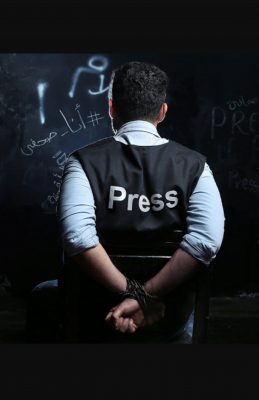 The Serraj government has declared its support for the freedom of journalists and media operating in Libya (Photo: Social Media).

The internationlly-recognized Libyan Presidency Council and Government of National Accord headed by Faiez Serraj and based in Tripoli has confirmed its support for the right of free media in Libya.

The supportive statements came on the back of a number of incidents in 2018 where media were subjected to arbitary arrests and harassment as well as new restrictive measures.

The public declarations by the Serraj administration also come in response to a petition signed by over 150 Libyan journalists and media outlets presented to the Serraj government complaining of systematic attacks against journalists and restrictions on freedom of the press.

For example, in August 2018 four Libya-based Reuters and AFP journalists and photographers were arbitrarily arrested by PC/GNA-aligned militias.

The four were held for over ten hours whilst covering a story on illegal migration at the Bu Sitta Naval Tripoli base. They had permission to be there.

On the other and, the Foreign Media Department (FMD) of Libya’s Foreign Ministry introduced a raft of bureaucratic measures in effect restricting the operation of foreign media inside Libya.

At his weekly press conference in Tripoli on Monday, Mohamed El-Sallak, the personal spokesperson for Serraj said that Serraj was “fully respectful of journalists and media professionals, and affirms their right to cover the various events and access to information”

Sallak added that Serraj considered “any action that has occurred contrary to this approach, is an individual act of censure of the press, and in no way reflects the policy of his government towards the press and the media.”

Sallak stressed that the Serraj government had taken “the necessary measures to prevent the reoccurance” of any media harassment or suppression.

Yesterday, Fathi Bashagha, Serraj’s Interior Minister, met with Mohamed Sallak at the Interior’s Tripoli headquarters where they discussed the “importance of overcoming the difficulties and obstacles that prevent media professionals from performing their duties and work”.

Bashagha stressed his keenness to respect the rights and safety of media professionals and journalists and to hold accountable all those who violate the law.

For his part, Sallak conveyed the affirmation of Sarraj of his “full respect for the media and journalists and his appreciation for the importance of the work and the right to cover events and access to information.”

The pronouncements by the Serraj government on freedom of the press come on the eve of the impending announcement of a date for the referendum on Libya’s permanent constitution.

UNSMIL also plans to hold its National Conference (Multaqa) before elections are held.

If the referendum is conducted successfully, the permanent constitution is adopted, and a general election date is announced, Libya is expected to go into hustings and election campaign mode.

Equally, it will be recalled that the High National Election Commission (HNEC) statd that it would only go ahead with the referendum if there was adequate security.

The Serraj administration will no doubt be coming under pressure from UNSMIL and the international community to restrain the militias aligned to it in general and especially in their dealings with the media during a democratic process.