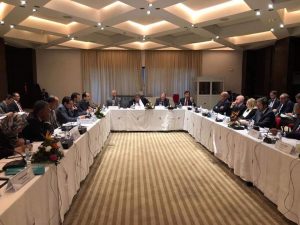 The ninth round of the Libyan Economic Dialogue was held in Tunis yesterday between Libya’s main sovereign entities and facilitated by “friendly foreign states”.

Previously the meetings had been brokered by US Chargé d’Affaires, Stephanie Williams who has since left her post US post and joined UNSMIL.

During the meeting several topics were discussed that would contribute to the consolidation of stability in Libya, including the continuation of the actions taken with regard to the ongoing economic reform programme, and the emphasis on continuing to hold meetings between Libyan institutions and submit proposals.

The meeting also reviewed the 2018 budget in addition to expediting the completion of the financial arrangements (budget) for the current fiscal year.

These include working to support and give greater importance to the implementation of development projects and developing frameworks for their implementation.

The National Oil Corporation will also be given more support (money) to help it increase its production rates.

More effort will be made so that financial and economic stability is achieved in Libya and to help rotate the wheel of the Libyan economy and to activate the role of the private sector.

It will be noted, however, that the politically discorded Libyan sovereign entities still need facilitation by the international community in order to reach agreement on economic policy and reform.

It must also be noted that the House of Representatives did not participate in the meeting.