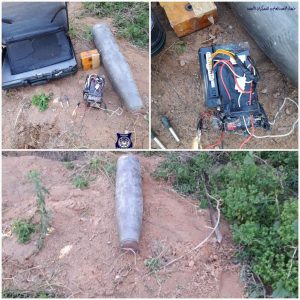 An explosive device was successfully defused in the Ghoat al-Shaal district in western Tripoli yesterday.

It was defused by a combination of security forces (The General Security Directorate and Security Postings in cooperation with the Explosives Unit in the General Directorate of Diplomatic Security) aligned to the Faiez Serraj Presidency Council and Government of National Accord.

The security forces reported that the device was booby-trapped ready for remote detonation.

The security forces reported that they were alerted to a “strange object” in a deserted farm in Ghoat al-Shaal.

The Explosives Unit was then contacted. A cordon was placed around the area to safeguard citizens and nearby residents until the device was successfully defused.

The security forces reported that they  immediately began to collect evidence and referred the matter to the competent authorities.

They further urged the general public to report any suspicious objects or movements to the nearest police station.